Differentiating between sarcoidosis as an autonomous disease and sarcoid-like reactions requires considerable efforts. The epithelioid cell granuloma is not equivalent to sarcoidosis because it may be identified in a number of infectious and noninfectious disorders, including neoplastic diseases. At the current state of knowledge, accurate distinction between different causes of epithelioid cell granulomas is in many cases not possible. Despite being characteristic of sarcoidosis and sarcoid-like reactions, the epithelioid cell granuloma is not their synonym, as numerous other causes can give rise to such a type of granulomatous infiltrate. Its etiology should be sought through careful additional investigations, including the genetic signature of both conditions.
Sarcoid-like reactions may be grouped generally into several subtypes. The differentiation between each one of them requires a certain combination of diagnostic tests. The major objective of these tests is to exclude or to prove the presence of an infectious, tumoral, or immunogenic antigen on the one hand, and to characterize the genetic profile of the affected patients (for example, sarcoidosis-specific genes) on the other. Only thus may one accurately differentiate between the two pathologic conditions described earlier in the abstract.
The clear differentiation between sarcoidosis as a separate disease and sarcoid-like pathologies leads to the more precise clarification of the final diagnosis, which may in turn allow for a more appropriate therapy and improvement in the quality of life of the patients. Equating sarcoid granulomas with sarcoidosis can lead to serious consequences in a number of patients. Sadly enough, after scrutinizing the current available data in the world literature, one cannot find criteria to allow such distinction in a high percentage of the investigated cases.
This critical review provides a completely new pathogenetic and diagnostic algorithm, helping in the differentiation between the disease sarcoidosis and the sarcoid-like pathologies with different etiology. An update on the inclusion criteria from the ATS/ERS/WASOG (American Thoracic Society/European Respiratory Society/World Association of Sarcoidosis and other Granulomatous Disorders) statement (which at the current state of knowledge seems to be ineffective) for the diagnosis of sarcoidosis is also suggested.
In conclusion, molecular mimicry may be seen as the main pathogenic generator not only of sarcoidosis but also of sarcoid-like reactions. A completely new and exact definition of the notion of or the sarcoidosis disease itself will be possible only after
1.
defining the genetic risk for the development of sarcoidosis as an autonomous disease and supplementing the sarcoidosis consensus of ATS/ERS/WASOG from 1999 with this important information, and
2.
defining the notion of a sarcoid-like reaction and its subforms.
Anzeige
Vorheriger Artikel Cancer, Infection and Disturbances of The Integrity of Tissue Homeostasis: The Most Significant Triggers for Molecular Mimicry and Autoimmunity in Dermatology?
Nächster Artikel Bacterial antigens and molecular mimicry: the bridging common problematic link in the pathogenesis of sarcoidosis and sarcoid-like reactions: Isn’t it time to wake up? 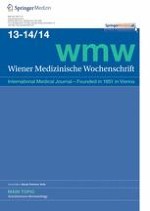 Pathways of Tumor development and progression in Drug-induced Nonmelanoma Skin Cancer: a New Hope or the Next Great Confusion?