Literature search using the database PubMed from 1966 to June 2013 was performed.

LVHT and TTS may be associated with NMDs. The pathogenetic link between unclassified CMPs and NMDs remains elusive. Outcome of LVHT and treatment of TTS are additionally determined by the presence or absence of an NMD. 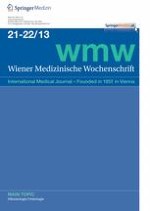 Triple-negative breast cancer possibly transforming into malignant melanoma due to targeted therapy? A case report and review of literature

Anorectal malignant melanoma in a hemorrhoidal nodule: a diagnostic and therapeutic problem