Acute inflammatory disorders of the orbit can cause not only blindness but also intracranial complications that directly threaten the patient’s life. Accurate and timely diagnosis of the type of orbital lesion is necessary for determining the treatment tactics.

The clinical and tomographical data of 57 patients with acute inflammatory disorders of the orbit were analyzed prospectively (2008–2017) along with the data of 37 patients analyzed retrospectively (1999–2007). Morphometric and functional parameters of the patients’ orbits on the healthy side were used as a control group (94 orbits). All patients underwent visometry, biomicroscopy, ophthalmoscopy, measuring the width of the palpebral fissure in the central part, and exophthalmometry, measuring the lateral displacement of the eyeball. All patients underwent computed tomography examination. The scanning was performed in axial, coronary, and orbitomeatal projections with a step size of 1 mm.

Clarification of the type of orbital inflammatory disease via the clinical and tomographic criteria determined in this study led to a decrease in the number of unjustified transcutaneous orbitotomy procedures.
Anzeige
Vorheriger Artikel Influence of optic media of the human eye on the imaging of Argus® II retinal prosthesis with intraoperative spectral-domain optical coherence tomography
Nächster Artikel Zehn Jahre multimodale Therapie uvealer Melanome an der Universitätsaugenklinik Innsbruck 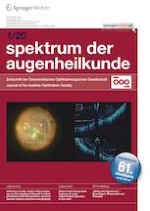