Only elective and curative resections (i.e. absence of distant metastases) were selected into each group to ascertain homogeneity and match for tumour stage. In all, 100 successive open rectal and rectosigmoid resections were compared with 100 similar laparoscopic procedures between 1st February 2005 and 31st December 2009 performed. A retrospective analysis was carried out and the patients were subsequently followed up until 30th April 2012.

Anastomotic insufficiency was found in two patients (laparoscopic) and in five patients (open). The two groups were also compared for hospital stay and operating time (laparoscopic group spent statistically significant less time, operating time were statistically significant shorter). During the follow-up period (laparoscopic group 41.6 months, open group 39.8 months) similar survival and recurrence rates were found: loco-regional recurrence 1 and 4, distant metastases 20 and 22, respectively. There were 13 cancer deaths in laparoscopic group to 19 in open group, the average 3-year survival being 76 % and 69 %, respectively. The long-term oncological results in more advanced tumours are superior, albeit not significantly. The difference in incidence of incisional herniae (laparoscopic:open = 4:18) identified during the follow-up period was found significant.

When comparing laparoscopic with open rectal and rectosigmoid resections there could be no inferior oncological outcome identified, hence the two techniques can be considered equivalent; in fact, due to its advantages laparoscopic rectosigmoid cancer surgery is the preferred option over open. 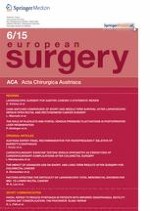