Despite wide usage of digoxin for various diseases in cardiology practice, its benefit is controversial and moreover it had been associated with unfavorable outcomes in some previous studies. The aim of this present study was to demonstrate whether digoxin usage was related with worse outcomes or not in patients with acute pulmonary embolisms.

A total number of 1215 patients retrospectively enrolled for the study. Basic demographic features, pulmonary embolism severity index (PESI) scores, laboratory parameters and medications of patients who had been diagnosed with acute pulmonary embolism were recorded. Short (30 days) and long-term mortality were reported as the clinical outcomes.

Total mortality was 15.4% in the study population and 78 of these subjects died within the first 30 days. The frequency of digoxin treatment was 8% and most of these patients were prior users. According to the binary logistic regression analyses the PESI score, right ventricle (RV) diastolic diameter, systolic pulmonary arterial pressure (sPAP), brain natriuretic peptide (BNP), troponin and digoxin therapy (odds ratio, OR: 2.82 95% confidence interval, CI: 1.39–8.31, P = 0.03) were found as independent predictors of short-term mortality. Beside these findings; sPAP, PESI score, RV diastolic diameter and digoxin therapy (hazard ratio, HR: 2.11 95%CI: 1.22–7.31, P = 0.03) were determined as independent predictors of long-term mortality in Cox regression analyses. In subgroup analysis, we determined significantly greater increase in short-term mortality with use of digoxin among patients who had chronic renal disease, among patients under thrombolytic therapy and under high dosage of digoxin therapy and among female patients.

Digoxin has been used extensively for decades in the treatment of heart failure and arrhythmias despite some controversies over its benefit. For the first time in the literature, we have demonstrated independent association of digoxin therapy with short-term and long-term mortality in patients with acute pulmonary embolism.
Anzeige
Vorheriger Artikel Expression profiles of miR-196, miR-132, miR-146a, and miR-134 in human colorectal cancer tissues in accordance with their clinical significance
Nächster Artikel A1B and BB blood group genotypes are risk factors for pulmonary embolism 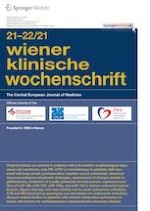