In retrospective view of prospective collected data, 204 women with or without OAB were enrolled into study, between August 2012 and December 2013. All patients were administered OAB validated questionnaires (OAB-V8) and whose score was > 8 were accepted as OAB. Patients were divided into two groups and group 1 consisted of patients with OAB, group 2 consisted of patients without OAB. Demographic data with anthropometric measurements and blood analyses were recorded. Statistical analyses including receiver operating characteristic (ROC) curves were performed; statistically significant p was < 0.05.

OAB with metabolic syndrome seems like more common in women than in those without. NC may be a novel indicator for OAB in selected female patients with MtS. 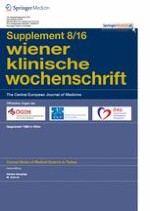 Can circulating M30 and M65 levels be beneficial markers in the diagnosis and management of patients with complete hydatidiform mole?