Coronavirus disease 2019 (COVID-19) disrupts routine care and alters treatment pathways in every medical specialty, including intensive care medicine, which has been at the core of the pandemic response. The impact of the pandemic is inevitably not limited to patients with severe acute respiratory syndrome coronavirus 2 (SARS-CoV-2) infection and their outcomes; however, the impact of COVID-19 on intensive care has not yet been analyzed.

The objective of this propensity score-matched study was to compare the clinical outcomes of non-COVID-19 critically ill patients with the outcomes of prepandemic patients. Critically ill, non-COVID-19 patients admitted to the intensive care unit (ICU) during the first wave of the pandemic were matched with patients admitted in the previous year. Mortality, length of stay, and rate of readmission were compared between the two groups after matching.

Coronavirus disease (COVID-19), the acute respiratory illness caused by the severe acute respiratory syndrome coronavirus 2 (SARS-CoV-2), remains a global health concern almost 1 year after emerging [1]. To date, more than 80 million confirmed cases of infection with the novel coronavirus have been documented worldwide and more than 1.8 million deaths due to COVID-19 have been recorded [2]. The rapid spread of the disease and the high rates of intensive care unit (ICU) admission in hospitalized patients pose major challenges to healthcare systems worldwide [3‐5]. To mitigate the impact of the outbreak, restrictions on public life, such as curfews and social distancing laws, have been adopted. Furthermore, healthcare systems have been reorganized to address the high number of patients: elective surgical activity has been reduced or cancelled, access to inpatient facilities has been restricted, visitor numbers have been limited, and provisional facilities designated for managing COVID-19 cases have been created [3, 6‐8].
The epidemiology, clinical course, the outcomes, and the management strategies of COVID-19 are still the subject of ongoing investigations. The growing body of evidence on COVID-19 has led to a development of numerous management guidelines and new treatment options [9‐11]; however, the impact of the pandemic inevitably extends beyond the patients infected with SARS-CoV‑2. Not only has an excess mortality been observed in several European countries during the first wave of the COVID-19 pandemic, but the number of excess deaths also surpassed the number of deaths attributed to COVID-19 in some countries [12‐14]. Furthermore, the reduction of elective activity was accompanied by a decline in hospital admission rates for cardiovascular emergencies and an increase in intrahospital mortality [15‐18].
Anzeige

The ICU capacity has been at the core of preparedness planning for COVID-19 and routine care has been disrupted by the pandemic [7, 19]; however, ICU performance and the outcomes of non-COVID-19 ICU patients during the pandemic have not been studied yet. The aim of the current study was to determine the impact of the COVID-19 pandemic and the contingency planning for widespread transmission of SARS-CoV‑2 on the clinical outcomes of critically ill patients treated in a single center in Vienna. We performed a vertical comparison of mortality, ICU readmission rates and ICU length of stay (ICU LOS) in patients treated during the implementation of COVID-19 associated measures with a propensity score-matched cohort of prepandemic ICU patients.

The study was conducted at the Vienna General Hospital, a tertiary care center with 60 general ICU beds in units managed by the anesthesiology department and approximately 2500 ICU admissions per year. Ethical approval (EK Nr. 2174/2020 from 10.11.2020) was granted by the Ethics Committee of the Medical University of Vienna, Vienna, Austria, which waived the requirement to obtain informed consent.
Between 13 March 2020 and 16 May 2020, when Austria, similarly to other European countries, was experiencing a steep rise of COVID-19 cases, several measures were implemented to increase the capacity of healthcare facilities to care for a high number of hospitalized COVID-19 patients and particularly to deal with a surge in the number of critically ill patients. In our center, visits were initially forbidden and subsequently limited, while access to the hospital was generally restricted, and several activities deemed non-essential and non-urgent, such as elective surgeries and ambulatory care were cancelled or postponed. Furthermore, new facilities and repurposed units have been designated for COVID-19 patients. Finally, to reduce contact and to prevent the spread of COVID-19 between healthcare workers, a rotation system was created, while restrictions regarding the maximum volume of clinical work time were temporarily revoked.

The aim of this study was to evaluate the ICU outcomes at the Vienna General Hospital during the first phase of the COVID-19 pandemic. Accordingly, we performed a vertical comparison between the clinical outcomes of patients admitted to the ICU while the COVID-19-associated measures were in place and the outcomes of critically ill patients from previous year. Using an electronic health records database, comprising clinical data of all patients treated in the ICU in our center, all critically ill non-COVID-19 patients admitted to the ICU during the study period as well as patients admitted in 2019, were identified. The larger matching pool was chosen to facilitate matching, based on the assumption that seasonal changes in outcomes were not relevant. The outcomes of interest were ICU and intrahospital mortality, the rate of readmission to the ICU and the ICU LOS. The outcomes were compared between the two groups after performing a nearest neighbor one-to-one propensity score matching.
Anzeige

Categorical data are reported as absolute number and relative frequency. Continuous variables are presented as median and interquartile range (IQR). The outcomes were compared between patients admitted to the ICU during the implementation of the COVID-19 related measures and the patients admitted in 2019. To account for a potential change in the case mix, propensity score matching was performed. The propensity score was estimated with logistic regression based on the following variables: age, sex, comorbidities (arterial hypertension, diabetes, malignant disease, heart failure, diabetes, chronic respiratory failure, chronic renal failure, chronic liver disease), SAPS III, and limitation of therapy. Based on the estimation of the propensity score, we conducted a nearest-neighbor one-to-one matching on the logit of the estimated propensity score, without replacement, stratified by admission diagnosis, in order to obtain an exact matching on this parameter [21]. Balance of covariate distribution in the matched sample was assessed by calculating the standardized means difference (SMD) for dichotomous and continuous variables [22].
Comparisons were performed using the Mann-Whitney U test for continuous variables, and the χ2 test for categorical variables, before and after matching. The outcomes were compared using the χ2 test (mortality and readmission rates), and the Mann-Whitney U test (ICU LOS), respectively. Statistical analysis was performed using the Python scientific ecosystem and the statsmodels module [23, 24]. A p-value of 0.05 was considered statistically significant.

A total of 390 non-COVID-19 ICU admissions between 13 March 2020 and 16 May 2020 were identified. Conversely, 2615 ICU admissions were documented in 2019. After excluding patients missing relevant data, readmissions, patients admitted to the burns unit, and patients admitted to the ICU for less than 1 day and for postoperative monitoring, 1632 patients eligible for matching (211 patients from 2020 and 1421 patients from 2019) were analyzed. Based on the estimation of the propensity score, every ICU patient admitted in 2020 during the implementation of COVID-19 related measures was matched with one ICU patient from 2019.

In this propensity score matched retrospective observational study performed in a single tertiary care center, clinical outcomes of ICU non-COVID-19 patients during the first phase of the pandemic did not differ significantly from the outcomes of patients admitted to the ICU during the previous year.

R. Bologheanu, M. Maleczek, D. Laxar and O. Kimberger declare that they have no competing interests.
Open Access This article is licensed under a Creative Commons Attribution 4.0 International License, which permits use, sharing, adaptation, distribution and reproduction in any medium or format, as long as you give appropriate credit to the original author(s) and the source, provide a link to the Creative Commons licence, and indicate if changes were made. The images or other third party material in this article are included in the article’s Creative Commons licence, unless indicated otherwise in a credit line to the material. If material is not included in the article’s Creative Commons licence and your intended use is not permitted by statutory regulation or exceeds the permitted use, you will need to obtain permission directly from the copyright holder. To view a copy of this licence, visit http://​creativecommons.​org/​licenses/​by/​4.​0/​. 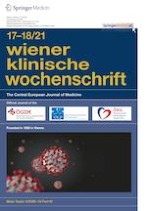 Patient concern inventory: an effective tool for easing telemedicine during the COVID-19 pandemic