Information about self-rated maternal bonding behavior during the first 16 years was assessed with the German version [ 14] of the Parental Bonding Instrument (PBI) [ 13], which contains two scales. Care was evaluated by 12 items on a continuum, ranging from empathy, closeness, emotional warmth, and affection to neglect, indifference, and emotional coldness. Control was measured by 13 items, ranging from overprotection, intrusion, excessive contact, control, infantilization, and prevention of independent behavior to autonomy and allowance of independence. Both the validity and the reliability of the PBI have been shown to be acceptable [ 13]. The scales of the PBI have been shown to be stable over time [ 15] and independent of current mood state [ 16] and the recipient’s gender [ 13].
Information about the quality of the intimate relationship was measured by the two “affective” [ 17] dimensions “involvement” and “affective expression” by means of the German version [ 17] of the Family Assessment Measure III Dyadic Relationships Scale (FAM-III-D) [ 18]. “Involvement” represents the quantity and quality of interest the partners have for each other. Emotional needs should be complementary in order to guarantee a feeling of security, a sense of togetherness and mutual esteem for appreciation of one another, a higher level of self-esteem, and independence. “Affective expression” reflects a dialectic relation between the security of the partnership and the autonomy of the individuals.
Information about quality of life and general health was gathered with the German version [ 19] of the World Health Organization Quality of Life (WHOQOL-BREF) instrument [ 20], which is composed of 26 items assigned to four domains. The physical domain represents constraints on quality of life by pain and discomfort, sleep and rest, energy and fatigue, mobility, activities of daily living, dependence on medicinal substances and medical aids, and work capacity. The psychological domain covers questions regarding positive feelings, thinking, learning, memory and concentration, self-esteem, body image and appearance, negative feelings, and spirituality/religion/personal beliefs. The domain social relationships reflects personal relationships, social support, and sexual activity. The domain environment is concerned with freedom, physical safety and security, home environment, financial resources, health and social care considering accessibility and quality, opportunities for acquiring new information and skills, participation in and opportunities for recreation/leisure activity, physical environment (pollution/noise/traffic/climate), and transport.

Two groups of students were formed with respect to the two maternal bonding types and the quality of adult intimate relationship: one group with a recalled “optimal maternal bonding type” (high level of care and low level of control), combined with a healthy intimate relationship in adulthood, and the other with a recalled “affectionless maternal control type” (low level of care and high level of control), also combined with a sound adult intimate relationship. High levels regarding care and control refer to values above the median, low levels to values below the median. A sound adult intimate relationship is represented by values below the median on the two dimensions “involvement” and “affective expression”. Due to the reciprocal coding of the FAM-III-D, lower scores on these two dimensions indicate a sound intimate relationship.
Group differences between females and males within the student sample were tested for significance by chi-square tests. Group differences between the two groups of students were analyzed for significance by t‑tests. The cut-off level for statistical significance was set at p < 0.05, 2‑tailed. Alpha adjustment for multiple comparisons was applied using Holm’s Sequential Bonferroni Procedure [ 21]. All statistical analyses were performed by IBM SPSS Statistics 24.

We gratefully acknowledge the contribution of Eva Mayr for the input of data.

M. Schmoeger, M. Deckert, P. Wagner, U. Sirsch and U. Willinger declare that they have no competing interests.

All procedures were in accordance with the ethical standards of the institutional and/or national research committee and with the 1964 Helsinki Declaration and its later amendments or comparable ethical standards.
Open Access This article is distributed under the terms of the Creative Commons Attribution 4.0 International License ( http://​creativecommons.​org/​licenses/​by/​4.​0/​), which permits unrestricted use, distribution, and reproduction in any medium, provided you give appropriate credit to the original author(s) and the source, provide a link to the Creative Commons license, and indicate if changes were made. 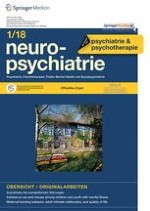 Substance use and misuse among children and youth with mental illness