There are few diseases in ophthalmology which could have a fatal outcome, one of them is orbital cellulitis. The aim of this article is to give epidemiological analysis of orbital cellulitis in adult patients in the Split region, Croatia.

The study was based on a retrospective review of medical records of 53 adult patients with orbital cellulitis treated during the period of 26 years from 1991 to 2016 at the Department of Ophthalmology in the University Hospital of Split.

Orbital cellulitis in adult patients is a relatively rare disease but with a possible fatal ending and damage to vision. It should be diagnosed quickly and treated adequately, very often in cooperation of an ophthalmologist with an otorhinolaryngologist and a maxillofacial surgeon. Orbital cellulitis appears to be more common in colder months, because sinusitis occurred more often then. It is treated with adequate antibiotic application but in almost one third of cases a surgical intervention was necessary.
Anzeige
Vorheriger Artikel Cancer incidence in an Austrian alpine valley 1983–2012
Nächster Artikel Alprostadil treatment of critical limb ischemia in hemodialysis patients 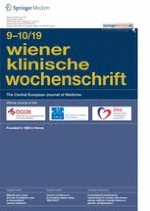