Sentinel node biopsy (SNB) has proved to be a useful and safe method for axillary staging in the surgical management of early breast cancer. Sentinel node (SN) detection rates with blue dye (patent blue) and radioisotopes (99m-Tc), either alone or particularly in combination, are high (95% to 100%). Even better detection rates were reported with fluorescent dyes like indocyanine green (ICG). This study was designed to show whether sentinel node detection and mapping of lymphatics with ICG might depend on the body mass index (BMI).

Between February 2014 and April 2015, SNB with blue dye, 99m-Tc, and ICG navigation was conducted for 100 consecutive procedures in patients scheduled for surgery of early breast cancer. ICG injection, lymphatic mapping with the Photodynamic Eye (PDE; Hamamatsu Photonics, Hamamatsu, Japan), and identification of the sentinel nodes with blue dye and ICG were followed by a final search for more lymph nodes with a gamma probe. Data were collected prospectively.

In all patients, up to six sentinel nodes (mean 2.49) were detected. No statistical correlation was found between the BMI and the identification of lymphatics or the detection of lymph nodes with ICG. Lymphatics were successfully identified preoperatively in no more than 79 cases. In 6 patients, a gamma probe was needed for detection. Adverse events or allergic reactions were absent throughout.

SN detection and lymphatic mapping with ICG were not related to the BMI. Pending answers to as yet unsolved questions, the combined use of blue dye and 99m-Tc imaging should, however, be continued.
Anzeige
Vorheriger Artikel Effects of papaverine on healing of colonic anastomosis in rats
Nächster Artikel Prevalence and risk factors of nasal pressure ulcers related to nasogastric intubation: an observational study 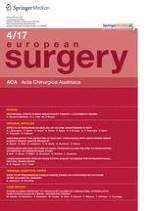 Effects of papaverine on healing of colonic anastomosis in rats