Entamoeba histolytica is an intestinal parasite that is located in the lumen of the human intestine and can attack the epithelium. Antimicrobial peptides (AMPs) are effective against the wide range of microorganisms, such as bacteria, fungi, viruses, yeasts, and protozoa. The CM11 is a chimeric peptide that is derived from bee venom and butterfly compounds. In this study, the cytotoxic effect of CM11 on Human colonic carcinoma (Caco‑2) cells and E. histolytica were assayed in various concentrations of peptide and metronidazole. The MTT results showed that the highest percentage of cytotoxicity on Caco‑2 cells was in 24 μg/ml of CM11 peptide at 24 h and 48 h, which was 49.8%, and 44.3%, respectively. In the metronidazole group, the highest cytotoxicity with 40 μg/ml concentration was observed after 24 h and 48 h, with 43.5%, and 42.1%, respectively. The highest rate of apoptosis induced by CM11 on Caco‑2 was 53.9% and 51.4% after 24 h and 48 h, respectively; however, these rates were 19.1% and 33.4% in the metronidazole group. The effect of peptide and metronidazole on E. histolytica at 24 h and 48 h showed that at the highest concentration of CM11 peptide (24 μg/ml) the cytotoxic effect was 93.7% and 94.9% and for metronidazole (40 μg/ml) was 65.5% and 74.3%, respectively. In coculture, 63.5% and 57.7% of parasites were killed in the highest concentration of CM11 and metronidazole, respectively. The results of this study revealed that CM11 peptide has a high toxicity on E. histolytica, and the use of antimicrobial peptides in the future can be considered as anti-amoebic compounds.
Anzeige
Vorheriger Artikel Serum nectin-2 and nectin-4 are diagnostic in lung cancer: which is superior?
Nächster Artikel How can maturity-onset diabetes of the young be identified among more common diabetes subtypes? 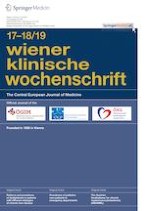 How can maturity-onset diabetes of the young be identified among more common diabetes subtypes?

Correction to: Prevalence of wheezing and atopic diseases in Austrian schoolchildren in conjunction with urban, rural or farm residence