Colonic anastomosis is a common surgical procedure. Complications after such surgery are still a major problem despite advances in techniques. We aimed to evaluate the effects of pre-operative and postoperative ozone administration on the recovery of colonic anastomoses in rats in this study.

An end-to-end colon anastomosis was created in the left colon under anesthesia in all experiment group animals. The control group was left alone for 4 days. The other two groups were administered intraperitoneal ozone at a dose of 1 mg/kg once a day. Ozone therapy was started 24 h after surgery to one group (ozone) and 1 h before surgery to the other group (pre-ozone). Samples for biochemical measurements were obtained from the operation site after adhesion scoring was performed and the burst pressure measured. 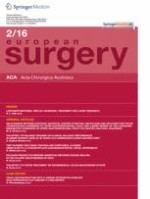