Role of German-speaking scholars in the development of pathology in Turkey | springermedizin.at Skip to main content
SUCHE MENÜ 1 2 3 4

The Westernization efforts initiated in the Ottoman Empire (also historically known as the Turkish Empire) in the 1800s also addressed medical training. Sultan Mahmud II opened a Western-style medical school, the Imperial School of Medicine, in Galatasaray, Istanbul, in 1839. Dr. Karl Ambros Bernard (1808–1895) from Vienna, who was educated at the Josephinum Military Medical Academy, was appointed as the director. The Sultan allowed the use of cadavers and autopsies, provided that they were carried out on deceased Christians. Dr. Sigmund Spitzer (1813–1895) from Vienna joined the medical school as an anatomy and dissection specialist in 1839. In the pre-World War I period, Professor Robert Reider (1861–1913) from the University of Bonn and Professor Georg Deycke (1865–1938) from Eppendorf Hospital in Hamburg came to Istanbul to train Turkish military doctors in postgraduate studies. The Gulhane Military Postgraduate Education & Training Hospital was opened in 1898. A student of the hospital, Hamdi Suat, was sent to Germany to specialize in pathology. He completed his education under the supervision of Professor Marchand (1846–1928). Professor Hamdi Suat Aknar (1873–1936) is regarded as the founder of pathology in Turkey. The Nazi pressure on scientists of Jewish origin during the pre-World War II period led to the emigration of scientists from Germany to Turkey. Professors P. Schwartz (1894–1977) from Frankfurt University and S. Oberndorfer (1876–1943) from Munich—the latter of whom was the first to define carcinoid tumors—took charge at Istanbul University, where they established the contemporary under-postgraduate pathology education and training system.
Anzeige
Vorheriger Artikel Georg von Hofmann-Wellenhof, vor 130 Jahren erstes Opfer am Beginn der Erforschung der Infektionskrankheiten in Österreich
Nächster Artikel Erratum to: Role of German-speaking scholars in the development of pathology in Turkey 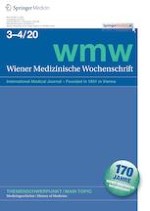 Erratum to: Role of German-speaking scholars in the development of pathology in Turkey

An 18th century description of endometriosis