Recent trends in the distribution of causative diseases of fever of unknown origin | springermedizin.at Skip to main content
SUCHE MENÜ 1 2 3 4

Fever of unknown origin is a challenging diagnostic problem and the aim of this research was to analyze trends in the distribution of its causative diseases. This retrospective study makes a comparison between two different clinical series of patients from two different periods: 227 from period 1 (1998–2002) and 602 from period 2 (2008–2012). There were fewer infections (31.72% vs.16.45%) and more miscellaneous causes (5.29% vs. 13.12%) in the period 2 series, whereas no significant differences in autoimmune diseases, malignancies and undiagnosed cases were found. Adult onset Still’s disease and lymphoma occupied the largest proportion in autoimmune diseases (75.00%) and malignancies (89.81%), respectively. Interestingly, the autoimmune diseases group, instead of infections, was found to be the leading category of the causative diseases in fever of unknown origin, which is contrary to previous reports. Further, adult onset Still’s disease and lymphoma were suggested to be valued more highly in view of the large and rising proportions found in this study. These trends could support the diagnosis and treatment of fever of unknown origin better in the future.
Anzeige
Vorheriger Artikel Patterns of diabetes care in Slovenia, Croatia, Serbia, Bulgaria and Romania
Nächster Artikel Middle ear adenoma with neuroendocrine differentiation 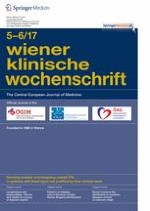