Diabetes mellitus affects 9% of the adult population worldwide and the economic burden of the disease is growing exponentially. In type 2 diabetes mellitus (T2DM), when life style interventions fail to achieve treatment targets, oral antidiabetic drugs are prescribed to improve glycemic control. Several new oral antidiabetics have been launched in the last few years, which enlarged the spectrum of available treatment options in T2DM. The present study aimed to examine T2DM treatment patterns in a cohort of 7769 patients recruited from the Diabetes Registry Tyrol (DRT) with at least one visit from 2012–2015. Secondly, the study aimed to evaluate the use of new oral antidiabetics compared to older oral antidiabetics (OAD). It was found that 43.4% of all patients were treated with OAD alone while 21.2% had oral antidiabetics combined with insulin. 19.9% of the study population were treated with insulin or insulin analogs only. 15.3% had no pharmacological treatment. Metformin was used most frequently (47.9% of the study population), followed by gliptines (27.2%). The most common treatment regimen in this population was the dual therapy of metformin and another OAD (17.2%), followed by metformin monotherapy (16.6%) and triple therapy of metformin and two additional OAD (11.0%). 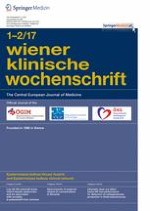 Diagnostic accuracy of the 14C-urea breath test in Helicobacter pylori infections: a meta-analysis

The medical and scientific responsibility of pollen information services