Dr. K.I. Mayer-Pickel:
The patient speaks Pashto. Originally from the Laghman province in Afghanistan, she has been living in Austria for 4 months. Her last menstruation was 4 months ago, now she is pregnant in the 15th week of gestation expecting twins. The patient’s history is positive for one miscarriage; she and her husband are cousins, so they are blood related (consanguinity). Her travel history has been negative since she came to Austria. In the 13th week of gestation, a routine check-up in the obstetrics outpatient clinic of Graz University Medical Center revealed an unremarkable pregnancy with dichorionic diamniotic twins. In the 15th week of gestation, the patient again came to the outpatient clinic because of a cold, headache and cough. She was diagnosed with an upper respiratory tract infection and was given ambroxol, a saline nasal spray and paracetamol as needed. Laboratory data at that time showed: leukocytes 4.9 × 10 9/L (normal: 4.4–11.3 × 10 9/L), erythrocytes 3.37 × 10 12/L (normal: 4.10–5.10 × 10 12/L), hemoglobin 10.2 g/dL (normal: 12.0–15.3 g/dL), hematocrit 28.4% (normal: 35.0–45.0%), neutrophils 80% (normal: 50–75%), lymphocytes 13% (normal: 20–40%), platelets 196 × 10 9/L (normal: 140–440 × 10 9/L), C‑reactive protein (CRP) 28.9 mg/L (normal: <5.0 mg/L) and fibrinogen 516 mg/dL (normal: 210–400 mg/dL). In case of persistent complaints the patient was advised to come to the emergency room (ER) of Graz University Medical Center. Two weeks later, the patient presented in the ER with a retrosternal pressure sensation radiating into the left arm and back, a 2-week history of headache, fever (39.9 °C), and poor appetite for 2 days. The patient showed tachycardia with a heart rate of 129 bpm. Echocardiography and Duplex sonography of the leg veins were unremarkable. Laboratory data: leukocytes 3.9 × 10 9/L, erythrocytes 2.94 × 10 12/L, hemoglobin 8.6 g/dL, hematocrit 25.1%, CRP 35.7 mg/L, lactate dehydrogenase (LDH) 261 U/L (normal: 120–240 U/L) and ferritin 233 ng/mL (normal: 30–150 ng/mL). The condition worsened 3 days later and the patient complained of headache but no fever, and laboratory data revealed pancytopenia and markedly elevated CRP. She was admitted to the Department of Obstetrics of the Graz University Medical Center. Laboratory data on admission: CRP 61.3 mg/L, leukocytes 2.87 × 10 9/L, erythrocytes 2.15 × 10 12/L, hemoglobin 6.6 g/dL, LDH 330 U/L, neutrophilic granulocytes 52%, lymphocytes 41%, myelocytes 1% (blast warning), platelets 102 × 10 9/L. The condition of both fetuses was good. Abdominal sonography revealed a 16-cm spleen. Because of severe anemia, two units of packed red blood cells were administered. The consulting neurologist could not identify a specific cause for the patient’s persistent headache. According to the hematologist, there was no evidence of acute leukemia or leukemic lymphoma. No fragmentocytes were seen on a blood smear.
A diagnostic test was performed.
Anzeige

Dr. G.J. Krejs:
The consulted hematologist Dr. F. Bauer will comment on the peripheral blood smear.
Anzeige
Dr. F. Bauer:
In contrast to the automated blood count, no blasts or other malignant cells could be found on the blood smear of the discussed patient. Indeed, the smear showed severe anemia, and mild leukopenia and thrombocytopenia, but no pathologically altered erythrocytes such as fragmentocytes, sickle cells, target cells or bite cells suggesting a microangiopathy, hemoglobinopathy or enzymopathy. However, the blood smear did reveal erythrocytes with inclusions, which together with the clinical presentation of the patient strongly suggested the diagnosis of malaria.
Dr. G.J. Krejs:
With a working diagnosis of malaria, we consulted Dr. Krause, head of the Section of Infectious Diseases and Tropical Medicine at this institution.
Dr. R. Krause:
Based on the history of the discussed patient, her origin and the clinical presentation including splenomegaly, anemia, thrombocytopenia and increased LDH, malaria had to be strongly suspected in this case. Afghanistan is a country which is highly endemic for malaria [ 27, 31, 32]. The disease occurs at altitudes below 2000 m above sea level and is most prevalent in snow-fed river valleys and areas used for growing rice. The highest prevalence of malaria (90% of all cases) is found in the eastern part of the country. Both Plasmodium falciparum and Plasmodium vivax infections can be found in Afghanistan. Transmission of Plasmodium vivax malaria takes place from May/June to November with negligible transmission occurring between December and April; however, many Plasmodium vivax infections relapse during the spring season. Transmission of Plasmodium falciparum primarily occurs between August and October, but its prevalence is unstable in this region and can fluctuate markedly from year to year due to climatic variations. Based on the infectious reservoir of hypnozoites and the ability of the disease to develop at lower temperatures in the vector, Plasmodium vivax affects larger geographic regions of Afghanistan than Plasmodium falciparum [ 30]. The discussed patient originates from Laghman, a district with an incidence of malaria of more than 5 per 1000 population per year [ 27, 30]. Her blood smear showed Plasmodium vivax trophozoites in erythrocytes (Fig.  1), which confirmed the diagnosis of tertian malaria.
×
Plasmodium vivax is geographically the most widely distributed cause of malaria with up to 2.5 billion people at risk and an estimated 80–300 million clinical cases every year, including severe disease and death [ 33, 34]. The most obvious feature that distinguishes Plasmodium vivax from Plasmodium falciparum is the development of dormant hypnozoites in the liver that cause relapse due to subsequent spill over into the bloodstream. Plasmodium vivax has a complex life cycle in which the parasite undergoes more than ten stages of cellular differentiation and invades at least four types of cells within two different hosts. Once infective sporozoites are inoculated into the human skin by female anopheles mosquitoes, they reach the bloodstream and enter hepatocytes, where they develop into either an actively dividing schizont (releasing merozoites into the bloodstream) or a dormant stage called hypnozoite [ 35]. Activation of hypnozoites weeks, months or years later causes reactivation of the infection, clinical malaria and the potential for transmission of the sexual gametocyte forms. During the erythrocytic stages, Plasmodium vivax merozoites predominantly invade reticulocytes [ 36, 37] leading to enlarged and more deformable cells [ 38]. All blood stage forms of Plasmodium vivax are found in the peripheral circulation. Enhanced deformability might somehow help infected cells to safely pass through the spleen. Further, the parasite also has adhesive knobs for sequestration in deep vascular beds as a way to avoid passage through the spleen [ 39]. Recent data showed that late asexual blood stage Plasmodium vivax parasites are capable of cytoadhering due to endothelial host receptors [ 40, 41]. In addition, data indicate that Plasmodium vivax parasites expand and replicate outside of the circulation in the hematopoietic niche of the bone marrow and possibly the spleen, affecting bone marrow function and host immunity [ 42]. However, this host-parasite interaction and its implication for diagnosis and treatment has to be further elucidated.
For the treatment of acute tertian malaria, chloroquine is available and should be administered in multiple doses within 48 h (initial dose 1000–1250 mg, after 6 h 500–750 mg, and 500 mg after 24 and 48 h), also in pregnant women [ 43]. In patients with Plasmodium vivax or Plasmodium ovale infection, several additional attacks (relapses) after months or even years without symptoms may occur because both Plasmodium vivax and ovale have dormant liver stage parasites (hypnozoites) that may reactivate. To reduce the chance of such relapses, treatment with 15 mg primaquine for 14 days should follow the treatment of the first attack. However, during pregnancy, disease suppression with 500 mg chloroquine once a week instead of with primaquine should follow the initial treatment; treatment of hypnozoites should be postponed to the postpartum period [ 43].
Dr. K.I. Mayer-Pickel:
Treatment with chloroquine was well-tolerated by the discussed patient. Her pregnancy with dichorionic diamniotic twins was unremarkable. In the 28th week of gestation, a mild discordance in the growth of both fetuses was observed on abdominal sonography. During the further course of the pregnancy, a minor ventricular septal defect was found in both fetuses. Vaginal delivery was initiated in the 38th week of gestation and two girls (body weight 2820 g, APGAR 9/10/10 and body weight 2750 g, APGAR 9/10/10) were born without any complications. Due to their ventricular septal defects, regular visits in the outpatient heart valve clinic were advised for the children.
Dr. G.J. Krejs:
In the 33-year history of 174 clinical-pathological conferences from the Medical University of Graz, this is the second case of malaria.
Dr. R. Krause:
Following the delivery, the patient was advised to take primaquine, but obviously did not adhere to her doctors’ instructions and 4 weeks later, she came back to the ER with fever. Recurrence of tertian malaria was diagnosed. She was again treated with chloroquine, followed by a course of primaquine. This time she adhered to the treatment recommendations and subsequently remained free of disease.
Anzeige

Information on Clinical-Pathological Conferences from the Medical University of Graz are also availabel under https://www.medunigraz.at/cpc-klinisch-pathologische-konferenz/ (in German).

P.K. Bauer, P. Krippl, E. Fabian, K.I. Mayer-Pickel, R. Krause, F. Bauer, and G.J. Krejs declare that they have no competing interests.
Open Access This article is licensed under a Creative Commons Attribution 4.0 International License, which permits use, sharing, adaptation, distribution and reproduction in any medium or format, as long as you give appropriate credit to the original author(s) and the source, provide a link to the Creative Commons licence, and indicate if changes were made. The images or other third party material in this article are included in the article’s Creative Commons licence, unless indicated otherwise in a credit line to the material. If material is not included in the article’s Creative Commons licence and your intended use is not permitted by statutory regulation or exceeds the permitted use, you will need to obtain permission directly from the copyright holder. To view a copy of this licence, visit http://​creativecommons.​org/​licenses/​by/​4.​0/​. 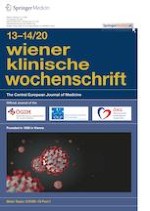 COVID-19: a primer for healthcare providers

Effect of a bundle of intervention strategies for the control of COVID-19 in Henan, a neighboring province of Wuhan, China