Dr. D. Schiller:
A 55-year-old retired female secretary was admitted to hospital due to vague abdominal pain and diarrhea (three mushy stools per day) during the last 8 months. She had neither fever nor reduced appetite and had not lost weight. She is married, has two healthy children, has never travelled outside Europe and does not smoke or drink alcohol. Her medical history includes repeated episodes of neurological symptoms, including transitory paresis of the left arm, vertigo and disturbed equilibrium. Once she also experienced transient paresthesia of the left leg. Magnetic resonance imaging (MRI) of the head during the last 10 years revealed slightly progressing white matter lesions. Cerebrospinal fluid (CSF) showed 50 cells/µl (85% lymphocytes, 15% monocytes) and increased concentration of protein (75 mg/dl, normal: 15–40 mg/dl), but without oligoclonal bands. Based on these findings, atypical multiple sclerosis (MS) was diagnosed. Therapy with glucocorticoids for 9 months had shown a temporary positive effect, but a therapeutic trial with interferon-beta 1a was futile.
For many years the patient suffered from headaches, arthralgia, diffuse myalgia and fatigue without signs of inflammation. Several neurological and rheumatological consultations failed to provide a clear diagnosis. At the age of 49 years the patient took premature disability retirement.
Anzeige
Arterial hypertension had been treated with lisinopril (5 mg per day) for the last 7 years. The dosage of lisinopril was increased to 10 mg per day 2 months before admission because the 24 h ambulatory blood pressure measurement gave a mean pressure of 150/95 mm Hg. The patient did not take any other medication.
On admission physical examination was without pathological findings except for pain on deep abdominal palpation but there was no guarding or rebound phenomenon. There was no hepatomegaly or splenomegaly. Skin and mucous membranes were unremarkable. Results were normal or negative for extensive laboratory tests, stool cultures, fecal calprotectin, abdominal ultrasonography, chest and abdominal computed tomography (CT), esophagogastroduodenoscopy and colonoscopy with biopsies, and MRI of the small bowel and the visceral vasculature performed 2 months earlier.
Selected laboratory results: erythrocyte sedimentation rate (ESR) within the first hour was 22 mm (normal: <20 mm), C‑reactive protein (CRP) 0.7 mg/dl (normal: <0.5 mg/dl); all the other parameters were normal or negative including cholesterol, triglycerides, thyroid stimulating hormone, free thyroxine, immunoglobulins (Ig)G, IgA, IgM, anti-tissue transglutaminase, serological tests for several viruses and borrelia, human immunodeficiency virus (HIV), Treponema pallidum hemagglutination assay (TPHA), and cytomegalovirus (CMV) PCR. Serological tests for several autoimmune antibodies were also negative, as were the results of urinalysis and microalbumin. Ultrasonography of the carotid arteries was negative for atherosclerosis and the echocardiogram identified hypertensive cardiomyopathy (thickness of septum 15 mm).
An important finding leading to the final diagnosis was provided by a simple, noninvasive examination.
Anzeige 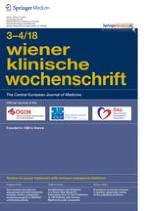