Diabetes mellitus (DM) is an independent risk factor for atrial fibrillation (AF). Increased atrial electromechanical delay (AEMD) is known to be a precursor of AF. In this study, we aimed to investigate AEMD in patients with type 2 DM.

A total of 110 participants were recruited to the present study. Of them, 70 were diabetic patients, and 40 were healthy control subjects. Basal characteristics were recorded and transthoracic echocardiography was performed for all study participants.

Basal characteristics were similar between the two groups. There was significant intra-atrial and interatrial electromechanical delay in the diabetic group compared with the control group. In the correlation analysis, no correlation existed between AEMD and hemoglobin A1C or fasting plasma glucose levels.

In the present study, we showed that there was significant AEMD in patients with type 2 DM compared with healthy control subjects. Increased AEMD might be an early marker of AF in this patient subset. To clear this hypothesis, further studies are needed.
Anzeige
Vorheriger Artikel Effects of migration background on weight status and motor performance of preschool children
Nächster Artikel Insulin resistance may contribute to vascular dysfunction in patients with chronic obstructive pulmonary disease 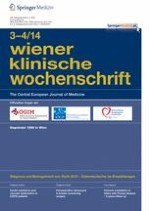