The review suggests a systematic link between personality functioning and health behavior in patients with chronic diseases that relate to self-regulation and coping strategies. These findings underline the importance of assessing personality functioning for diagnostics and treatment planning in psychosomatic medicine. Finally, an assessment of personality functioning could be helpful in choosing specific psychotherapeutic treatment strategies; however, more empirical studies are needed to comprehensively prove these assumptions.
Hinweise
The authors Wagner-Skacel J. and Matzer F. contributed equally to the manuscript.

Patients in consultation-liaison psychiatry, psychotherapy, and psychosomatics are often regarded to be difficult to treat. Their impairments in the realms of emotion regulation and interpersonal relationships, frequently combined with an unhealthy lifestyle and few adaptive health-related behaviors, lead to challenges for healthcare professionals.

The concept of personality functioning and structural integration

According to biopsychosocial medicine, psychosocial aspects may be relevant in pathogenesis, triggering or maintaining multiple somatic symptoms and diseases. Personality functioning may therefore be one relevant factor contributing to health and disease. Reduced personality functioning goes along with reduced core capacities in perception, regulation, communication, and attachment; for example, there are deficits in experience, verbal expression, and regulation of emotion [23]. Such impairments in self and interpersonal functioning may impact on coping strategies, emotion regulation and stress [24, 25]. Via stimulation of stress-regulating systems like the hypothalamic-pituitary-adrenal axis or the autonomic nervous system, but also via alterations of the immune system, a chronic activation of these systems results in their dysregulation and may finally lead to aggregate physiological and mental consequences [26, 27]. We therefore suggest that there is a link between personality functioning and physical as well as mental health, including affective dynamics such as depressive, anxiety, and somatization symptoms in patients with somatic diseases [28]. Interrelations between personality functioning and health might also be mediated via adverse health behavior and lifestyle [29]. Furthermore, problems in forming and regulating interpersonal relationships including the doctor-patient relationship may impact on the course of diseases and adherence to treatment [7].
In the following sections, studies assessing personality functioning in various medical fields are reviewed. Starting from the field of internal medicine, we will continue with the phenomenon of chronic pain and development of postoperative pain and finally review studies from the field of transplantation medicine.

In orthopedics, the role of personality functioning has recently been studied among patients after total knee arthroplasty [38]. Total knee arthroplasty is a common treatment for end-stage knee osteoarthritis and although pain relief can be achieved for most patients, psychological factors such as poor mental health and pain catastrophizing have been shown to negatively affect postoperative outcome [39]. In addition, borderline personality features have been linked to a higher prevalence of osteoarthritis [40]. In a pilot study among 47 patients with osteoarthritis undergoing total knee arthroplasty [38], personality functioning was assessed using the inventory of personality organization (IPO, [41]), a self-report version of the previously mentioned structured interview of personality organization (STIPO [3, 6]). Pain levels before and 8 weeks after total knee arthroplasty as well as pain change were assessed and applied as dependent variables in a subsequent backward linear regression analysis including several predictors, such as an observer-rated knee questionnaire, the brief symptom Inventory including the subscales depression, anxiety, somatization, a global severity index of mental health as well as personality functioning including the IPO subscales identity diffusion, primitive defenses, reality testing, and a total score. Results showed that self-rated postoperative pain, that could be rather classified as acute pain, was significantly predicted by the IPO subscale identity diffusion; interestingly, higher identity diffusion predicting less pain. The authors concluded that this finding matches a theory by Sansone and Sansone [42] known as the pain paradox in borderline personality disorder, suggesting that patients with BPD tend to have lower sensitivity for acute painful stimuli and higher sensitivity to chronic pain. The surgery itself might represent a physical trauma within an interpersonal relationship, thus evoking a psychodynamic reaction affecting disintegrated bodily aspects of the self and by that way altering pain sensitivity. Thus, screening for personality functioning in patients undergoing total knee arthroplasty and specific psychotherapeutic support might be useful for at least some patients.
In a next study by the same study group [43], 144 patients scheduled for total knee arthroplasty were enrolled and tested for personality structure using the IPO. Pain and function of the knee were assessed before and 12 months after the surgery. A stepwise multiple linear regression included the predictors age, sex, the subscales and total score of the IPO, the baseline self-rated knee pain and function, an observer-rated knee index and a categorical variable for the presence or absence of BPD. Analyses estimated the significant predictors of knee pain 12 months after surgery. Postoperative pain 12 months after surgery, classified as chronic pain, was predicted by preoperative knee function, female sex and the subscale primitive defenses of the IPO indicating more primitive defenses predicting more pain. In accordance with previous findings, aspects of borderline personality organization, such as primitive defenses could account for vulnerability for the development of chronic pain. These results suggest certain psychodynamic and psychosomatic mechanisms of maladaptation after total knee arthroplasty in some patients, who might not be able to cope with the affects, inner conflict, tension and eventually reactivation of experienced trauma evoked by such a surgical intervention. Consequently, fundamental psychic defenses could manifest as bodily pain.

A study of Calia et al. evaluated the association between attachment style, compliance, quality of life, and renal function in adult patients after kidney transplantation [44]. Although this study did not directly assess personality functioning, it included measures of alexithymia, emotional self-efficacy and attachment, which are all considered part of personality functioning/structural integration. Patients with avoidant attachment had a significantly better perception of their own general health than patients with anxious attachment. Calia et al. suggested that the evaluation of the attachment style in adult kidney transplant patients can increase compliance with goal-directed psychological support program for these patients [44]. In another study, they evaluated the associations between alexithymia or emotional self-efficacy and compliance in renal transplant patients. Patients with high levels of alexithymia reported a negative perception of their quality of life (QoL) and lower levels of compliance compared with patients with low levels of alexithymia. The ability to recognize and express emotions as well as the strongly related management of negative emotions may influence compliance and QoL of renal transplant patients. Therefore, psychological support could be useful in these patients in order to increase their compliance and QoL [45].

In psychosomatic medicine, the higher prevalence of several somatic conditions among patients with BPD is of particular importance [47]. This can already be seen among remitted BPD patients: Zaharini et al. [48] compared 64 patients with BPD with a group of 200 participants with a former diagnosis of BPD. Results showed that several medical conditions, such as syndrome-like conditions (chronic fatigue, fibromyalgia, temporomandibular joint syndrome), obesity, osteoarthritis, diabetes, hypertension, chronic back pain and urinary incontinence were significantly more common among non-remitted borderline patients as compared to remitted borderline patients. In general, several somatic illnesses have a higher prevalence when compared to community samples [49, 50]. These include cardiovascular diseases, metabolic conditions and gastrointestinal diseases, venereal diseases, Human Immundeficiency Virus (HIV), urinary incontinence and sleep disorders. Moreover, skin conditions, rheumatoid arthritis and the outcome after plastic surgery have been addressed. As already mentioned, disturbances in the regulation of pain sensation and pain state also regularly occur among this group. A recent review by Doering gives an overview over BPD in patients with medical illnesses [47].

The BPD patients report more unhealthy lifestyle choices [51], including smoking, daily alcohol use, lack of regular exercise, daily use of sleep medication or overuse of pain medication. A misuse or abuse of prescriptions and medications, such as analgesics and high-potency benzodiazepines is also common in BPD [51].

Finally, costly forms of treatment, such as medically related emergency room visits or medical hospitalizations are also more frequent among patients with BPD [48]. In a review by Sansone and Sansone [52] on BPD in the primary care setting, the authors reported higher rates of healthcare utilization among this group. This might be related to the tendency of some BPD patients to develop high somatic preoccupation and/or symptoms of somatization. The same authors also showed that patients with BPD in the primary care setting tended to present with unsubstantiated chronic pain as well as somatic preoccupation as compared to BPD patients in mental health settings [49].
Anzeige

Misperceptions of one’s illness have also been related to BPD. For example, BPD patients with diabetes were found to have negative distortions or a sense of disability in illness perceptions, thus perpetuating the victim role [50]. In general, BPD goes along with a negative perception of health which, in consequence, might impact on health-related behaviors, compliance, and healthcare utilization.

It has been proposed that one way of bringing psychodynamic concepts and neuroscience together could be via the OPD, as this instrument provides both an expanded view of individual psychological content and a systematic reduction of content that is necessary for experimental settings [53]. That way, it would also serve as an option to individualize experiments [54]. The authors propose that “only if the experiment touches the mentally represented themes that are of individual relevance to each subject, results could have validity and meaning in a deeper sense” [55]. The OPD could therefore be used for gathering individualized information in a systematic way and it could also be helpful in interpreting brain activity on a psychodynamic level. For example, in such an individualized paradigm Kessler et al. presented individual stimulus sentences that had been gathered via OPD to 29 healthy female subjects who freely associated to these stimuli while being in an Magnetic Resonance Imaging (MRI) scanner [56]. Associations to conflict-related sentences were associated with several behavioral and psychophysiological correlates that correspond with the concept of repression, a central defense mechanism in psychodynamic theory. Recently, a neurobiologically and clinically grounded model of personality organization has been introduced. This so-called neuropsychodynamic model relates the psychodynamic model of personality functioning, the construct of the self and its neuronal correlates to each other [57]. Empirical data on neuronal correlates of the self suggest that early relational and attachment experiences as well as the brain’s resting state activity relate to the concept of the self. The authors propose a multilayered model of the self, with four different layers (relational alignment, self-constitution, self-manifestation, and self-expansion) that are associated with different neuronal correlates, corresponding to different levels of personality organization including neurotic and borderline organization. That way, the psychodynamic concept of personality organization could also be linked to the concept of the self and its neuroscientific correlates; however, future research will show if this novel neuropsychodynamic model of personality organization will find further empirical support.

The authors obtained no funding. No funding from pharmaceutical companies or other funding agencies was obtained.

J. Wagner-Skacel, F. Matzer, A. Kohlhammer-Dohr, N. Dalkner and E. Jauk declare that they have no competing interests.
Open Access This article is licensed under a Creative Commons Attribution 4.0 International License, which permits use, sharing, adaptation, distribution and reproduction in any medium or format, as long as you give appropriate credit to the original author(s) and the source, provide a link to the Creative Commons licence, and indicate if changes were made. The images or other third party material in this article are included in the article’s Creative Commons licence, unless indicated otherwise in a credit line to the material. If material is not included in the article’s Creative Commons licence and your intended use is not permitted by statutory regulation or exceeds the permitted use, you will need to obtain permission directly from the copyright holder. To view a copy of this licence, visit http://​creativecommons.​org/​licenses/​by/​4.​0/​. 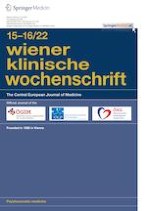