We present the results of a retrospective study of acute myeloid leukemia (AML) treatment in Serbia in the period 2000–2012. Treatment was performed in four centers, two of which were located in Belgrade, one in Nis, and one in Novi Sad. Children affected by non-acute promyelocytic leukemia (non-APL) subtypes received treatment regimens derived from protocols of Berlin Frankfurt Munster AML study group, whereas children with APL were treated according to the AIEOP/GIMEMA ATRA plus Idarubicin “AIDA” protocol. Total number of patients was 106, out of whom 48 were girls (45.3 %) and 58 boys (54.7 %); median age at diagnosis was 9.0 years (range 1 month–17.9 years). In total, 82.1 % of patients achieved complete remission after induction treatment. Twelve patients (11.3 %) died during induction, before achieving complete remission; there were nine deaths during remission (10.5 %) and 20 patients relapsed (23.2 %). Median time of follow-up was 54 months. Two patients (1.9 %) were lost to follow-up. Event-free survival was 50.3 % and overall survival was 58.9 %. 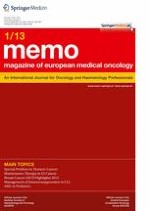 The pathology of low and intermediate neuroendocrine lung tumors