Totally implantable venous access ports (TIAP) are commonly used in oncology, but which insertion modality should be preferred is still discussed controversially. We present a retrospective survey of the two main approaches for central venous cannulation from a single surgical department.

All TIAP procedures between January 2004 and December 2010 were included. Direct puncture of the subclavian vein (DP) represented the standard approach for port insertion until 2007, when surgical cut-down to the cephalic vein (CD) was introduced as a reliable alternative at our department. Primary success rate, procedure time and postoperative complications within 30 days were analysed. 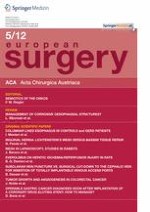 Which mesh is appropriate for laparoscopic use? Prevention of adhesions to macroporous mesh, a rabbit model

Resection or bypass in the treatment of corrosive oesophageal strictures? Malignant transformation as a late complication in both methods

Regulation of tumor growth and angiogenesis in colorectal cancer