For decades, Iodine-131 has been used for the treatment of patients with thyroid cancer. In recent years, increasingly, other radiopharmaceuticals are in clinical use in the treatment of various malignant diseases. Although in principle these therapies—as in all applications of radionuclides—special radiation protection measures are required, a separate nuclear medicine therapy department is not necessary in many cases due to the lower or lack of gamma radiation. In the following article, four different radionuclide therapies are more closely presented which are emerging in the last years. One of them is the “Peptide Receptor Radionuclide Therapy,” the so-called PRRT in which radiolabeled somatostatin (SST)-receptor(R) ligands are used in patients with neuroendocrine tumors. On the basis of radiolabeled antibodies against CD20-positive cells, the so-called radioimmunotherapy is used in the treatment of certain forms of malignant lymphoma. In primary or secondary liver tumors, the 90Y-labeled particles can be administered. Last but not the least, the palliative approach of bone-seeking radiopharmaceuticals is noted in patients with painful bone metastases. 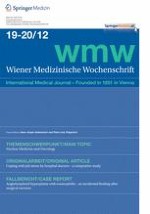 The role of nuclear medicine in differentiated thyroid cancer

Coping with job stress by hospital doctors: a comparative study