The purpose of this work is to examine the serum proteomic profiles associated with the subsequent development of diabetic nephropathy (DN) in patients with type 2 diabetes and to develop and validate a decision tree based on the profiles to predict the risk of DN in advance by albuminuria.

Surface-enhanced laser desorption/ionization time-of-flight mass spectrometry was used to obtain the proteomic profiles from baseline serum samples of 84 patients with type 2 diabetes with normal albuminuria, including 42 case subjects who developed DN after 4 years and 42 control subjects who remained normoalbuminuric over the same 4 years. From signatures of protein mass, a decision tree was established for predicting DN.

At baseline, urinary albumin/creatinine ratio was similar between the case and control groups. The intensities of 5 peaks detected by CM10 chips appeared up-regulated, whereas 18 peaks were down-regulated more than twofold in the case group than compared with the control group in the training set. An optimum discriminatory decision tree for case subjects created with four nodes using four distinct masses was challenged with testing set. The positive predictive value was 77.8 % (7/9), and the negative predictive value was 72.7 % (8/11).

We developed and validated a decision tree to predict DN in patients with type 2 diabetes.
Anzeige
Nächster Artikel Vitamin D levels and comorbidities in ambulatory and hospitalized patients in Austria 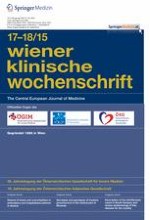 Excessive sweating induced by interaction between agomelatine and duloxetine hydrochloride: case report and review of the literature