Treatment of idiopathic thrombocytopenic purpura (ITP) refractory to medical management consists of splenectomy with a high success rate. Recurrent ITP may be due to re-growth of a missed accessory spleen.

The clinical course of a 59-year-old female who had undergone laparoscopic splenectomy for ITP refractory to medical management 5 years ago developed a sudden drop in her platelet count to as low as 1 K/ml and she developed purpura.

On liver/spleen scan and CT scan a 5 × 5 cm mass containing splenic tissue was found close to the tail of the pancreas. Eltrombopag (Promacta®) was used to stabilize her platelet count. During laparoscopy dense adhesion of the omentum to the abdominal wall and stomach from her previous splenectomy had to be divided. The colon was identified, the lesser sack opened through the gastrocolic ligament and the splenic flexure was taken down. The stomach was lifted anteriorly and medially to expose the tail of the pancreas and superior and dorsal to the pancreas at the previous splenic hilum the mass was identified and carefully dissected off the pancreas, kidney and adrenal gland. An endo GI with a white load was used to divide the vascular pedicle, which originated from a side branch of the splenic artery and splenic vein at the tail of the pancreas and secured with an endoloop. The accessory spleen was placed into an endobag, cut in small pieces and removed through the 10–12 mm port. The patient recovered well from the procedure without any complications and her platelet count normalized within a few weeks. 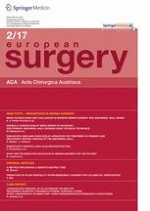