Cardiac sarcoidosis (CS) and giant cell myocarditis (GCM) represent rare types of myocardial inflammation frequently associated with ventricular tachycardia and advanced types of atrioventricular block (AVB) [ 1, 2]. The majority of patients with GCM either die or undergo heart transplantation unless combined immunosuppressive therapy is administered early in the course of the disease [ 3]. The case presented demonstrates that even complex multimodality imaging approach was not capable of distinguishing between CS and GCM and endomyocardial biopsy was essential for establishing the correct diagnosis. This article reports the case of a 37-year-old otherwise healthy man who was admitted to this hospital for third-degree AVB. Transthoracic echocardiography revealed non-dilated left ventricle (LV) with preserved ejection fraction (EF) despite dyskinesis of the thickened basal part of the interventricular septum (IVS) (video 1), normal systolic function of the non-dilated right ventricle and absence of valvular heart disease, pulmonary hypertension and pericardial effusion. The patient subsequently underwent cardiac magnetic resonance imaging depicting transmural late gadolinium enhancement (LGE) in the basal segments of the IVS and lateral wall of the LV (Fig.  1a), midmyocardial enhancement in middle and apical segments of IVS and the apical segment of the anterior LV wall. Based on this type of LGE pattern together with the presence of advanced AVB, a CS was suspected and positron emission tomography-computed tomography was indicated. The examination revealed mediastinal lymphadenopathy and a high accumulation of 18-fluorodeoxyglucose in the basal segments of the IVS and lateral wall (Fig.  1b and c). In order to confirm the diagnosis of CS and exclude others causes of pathological myocardial infiltration without possible delay, an extracardiac biopsy from the lymph nodes was not indicated and an endomyocardial biopsy was directly performed. In contrast to the expectations, not CS but GCM was revealed in the myocardial biopsy specimens (Fig.  1d). Combined immunosuppressive therapy including corticosteroids, mycophenolate mofetil and cyclosporine was administered and a cardioverter defibrillator was implanted. Combined immunosuppressive treatment led to alleviation of the AVB and treatment was subsequently reduced to sole administration of corticosteroids. During the subsequent 2‑year follow-up 2 episodes of sustained ventricular tachycardia occurred, which were successfully terminated by ICD discharge. The patient’s outcome was otherwise uneventful, with exercise capacity minimally reduced to New York Heart Association (NYHA) stages I–II. The LV global systolic function remained only mildly reduced with an ejection fraction of 45% with thinning and dyskinesis of the basal segment of the IVS (video 2).
×
…
Anzeige
Vorheriger Artikel What’s new in the ESC 2018 guidelines for arterial hypertension
Nächster Artikel MUW researcher of the month 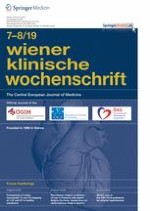 What is normal? A central question in the application of CMR mapping techniques

Ranolazine: impact on quality of life in patients with stable angina pectoris, results from an observational study in Austria – the ARETHA AT study

What’s new in the ESC 2018 guidelines for arterial hypertension