Puncture of the posterior venous wall during ultrasound-guided internal jugular vein cannulation seems to be common, making underlying artery at risk of injury.

Two cases of injury through the posterior wall of the internal jugular vein and an injury to the underlying artery are reported.

In case number 1, a small injury of the carotid arterial wall resulted in a retrograde dissection of the common carotid artery and ascending part of the aorta, causing a fatal cardiac tamponade—a sequence of events never previously described. In case number 2, an unexpected injury to the thyrocervical trunk in a severely thrombocytopenic patient caused an extensive hematoma that compromised the upper airway, eventually leading to a fatal outcome.

These two reported fatal arterial complications during ultrasound-guided cannulation of the internal jugular vein add to other publications of complications after central vein catheterization. It is important to increase awareness of these avoidable serious complications. 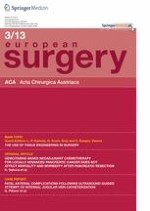 Tissue engineering and its potential use in surgery

The use of Keratinocytes: Things we should keep in mind!