The aim of this study was to investigate the composition, stability, and biological activity of the complexes formed in solution upon interaction of calcium (Ca) ions with etidronic acid (EA), and to compare their effects on bone mineral density (BMD) in estrogen-deficient rats with osteoporosis.

The study was conducted on 40 female Wistar rats. Osteoporosis was modeled by bilateral oophorectomy and therapy was started 4 months after surgery. Four groups were under study: the first group did not receive any osteoporotic treatment, only supplementation of Ca/vitamin D (D) in their diet. The second group received a single parenteral dose of EA with Ca/D supplementation. The third group received a Ca complex of EA (Ca-EA) without additional use of Ca/D. The fourth group received Ca-EA with Ca/D. Bone parameters (BMD and bone mineral content [BMC] in spine and total body) were measured by X‑ray densitometry using Prodigy (GE Medical systems, Model 8743, 2005; USA; program “Experimental animals”) thrice (before treatment, after 1 and 3 months of follow-up).

We showed a positive effect of the studied Ca-EA complexes on the BMD and BMC indices, with or without additional supplementation of Ca/D. More explicit dynamics of indices were observed in the group of animals treated with Ca-EA without additional Ca/D after 1 and 3 months of follow-up. 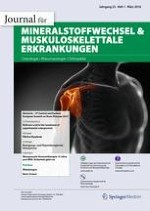