We evaluated the disease management programme (DMP) “Therapie Aktiv” for diabetes mellitus type 2 during the first year of implementation in a cluster-randomised controlled trial (RCT), which revealed an improvement of process quality, but only insignificant effects on HbA1c. To further analyse the effects of the DMP we followed up participants of the RCT for another year.

After completion of the RCT, the study was continued as an open observational trial. By patient’s choice, three groups were formed. Group 1 (DMP/DMP): interventions of the RCT (DMP), who remained in the DMP; group 2 (Control/DMP): controls of the RCT (usual care), who participated in the DMP during the second year; group 3 (Control/Control): controls of the RCT (usual care), who remained as controls. Primary outcome measure: HbA1c. Secondary outcome measures: BMI, lipids, blood pressure and measures of process quality.

The DMP clearly enhances process quality. Furthermore, the DMP yields a reduction of HbA1c within groups after 2 years, but significance is lost in between-group analysis. We conclude that the DMP has only a minor effect on metabolic control. 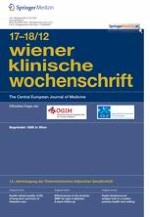 Neoadjuvant radiotherapy of head and neck carcinoma: an obstacle for plastic reconstruction?