Laparoscopic cholecystectomy (LC) has become a standard treatment for gallbladder lesions. However, it is not pain-free. This study compared pain intensity between using traditional and bladeless trocar for LC.

Ninety-one consecutive patients undergoing LC were categorized into two groups, including bladeless (BL) and traditional group. A visual analog scale (VAS) was used to assess postoperative pain (in the recovery unit, 6, 24 h after surgery, and before discharge) and the amount of analgesics use was also recorded.

Bladeless trocar may work in the early postoperative stage, demonstrated by less pain score. This short-term benefit explained less meperidine use in early hours after LC. 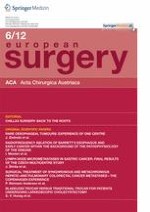 Lymphangioma of the cervical esophagus associated with an inlet patch