Prompted by the autopsy of Ludwig van Beethoven (1770–1827) to seek the origins of disease in a changed anatomy, Carl Freiherr von Rokitansky (1804–1878) initiated a paradigm shift from speculative natural philosophical medicine to systematic scientific medicine. Until then, autopsy reports usually contained clinical observations as well as the diagnosis of the attending physician, which the pathologist merely supplemented with a description of the corpse. Influenced by Rokitansky’s search for scientific explanations for disease, pathology evolved from a descriptive to an explanatory science from the early 1830s onwards. The protocols now contained both a clinical and often divergent pathological diagnosis, which, however, explained the origin of the disease and the cause of death. This research led to Rokitansky’s three-volume Handbook of Pathological Anatomy, the standard textbook for all medical students of the Habsburg monarchy, which has been translated into Russian, English and Italian. In this work he systematically described the diseases of each individual organ and explained the relationships between clinical symptoms and pathological changes to the organs, i.e., the clinicopathological correlation, which enabled a scientifically based diagnosis. Systematic research into each individual organ led to the development of new specialist clinical disciplines. In his role as medical consultant in the State Ministry, Rokitansky supported the establishment of the world’s first clinic for otology. He also influenced the research of such pioneering otorhinolaryngologists as Joseph Toynbee (1815–1866), William Wilde (1815–1876), Prosper Menière (1799–1862), Friedrich Semeleder (1832–1901), Johann Schnitzler (1835–1893), and Adam Politzer (1835–1920).
Anzeige
Vorheriger Artikel Beethoven’s death as the starting point for Rokitansky’s family ties to the art world “We were there when they buried him and when he died we wept.”
Nächster Artikel Ludwig van Beethoven—a psychiatric perspective

Titel
Beethoven’s influence on Rokitansky’s methodology
“The facial nerves were of considerable thickness; the auditory nerves, on the other hand, were shrunk and marrowless”
verfasst von
Dr. med. Ursula Rokitansky-Tilscher 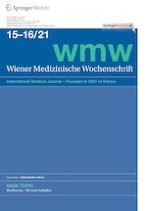 Beethoven’s death as the starting point for Rokitansky’s family ties to the art world “We were there when they buried him and when he died we wept.”

Beethoven’s death mask and a short history of face masks