» Zum Volltext PDF-Version jetzt herunterladen
Wichtige Hinweise
Due to space limits I have referred to review articles whenever possible. Therefore, I apologize to the many authors whose original publications were not cited directly.

The original “apoptosis–necrosis” concept was based on morphology and (patho)physiological conditions of the occurrence of cell death: (1) apoptosis, with nuclear and cytoplasmic condensation/fragmentation prominent, exclusion of autolysis, considered to result from coordinated self-destruction of a cell; (2) necrosis, with cell lysis prominent, caused by violent environmental perturbation leading to collapse of internal homeostasis. This suggestion initiated a controversial discussion within the scientific community and it soon became clear that the “apoptosis–necrosis dichotomy” was not generally applicable. Nowadays, there is sufficient evidence that cells may activate diverse suicide pathways, thereby allowing a flexible response to environmental changes, either physiological or pathological. The present paper commemorates electron microscopic and cytochemical studies on cell death of cultured human mammary carcinoma cells performed by Adi Ellinger, adding a significant contribution to recognize that autophagy can be involved in regulated cell death, thereby challenging the apoptosis–necrosis dichotomy still predominant in the 1990s.

Titel
A cell’s agony of choice: how to cross the Styx?
From morphological to molecular approaches to disclose its decision
Autor:
Dr. Wilfried Bursch 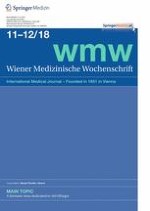 Unexpected aspects in the dynamics of horizontal gene transfer of prokaryotes: the impact of outer membrane vesicles

A scientific approach to the reform of a medical curriculum