Idiopathic macular hole is the end result of traction exerted by posterior vitreous detachment on the contours of the fovea accompanied by cystic degeneration of the inner retina. Surgical removal of all tractional forces—anteroposterior and tangential—acting on these borders, followed by a temporary tamponade providing a scaffold for the migration of glial cells that seal the hole, leads to resolution in almost all cases. Nevertheless, the initial surgery is not successful in a small percentage of eyes even when all surgical and postsurgical guidelines are followed. A plug of hyaluronic acid (HA), a major component of the vitreous, pooled into the macular hole at the end of the procedure is another reason for failure in these selected cases. Restriction of this plug by the tamponade will inhibit glial migration that occurs across the hole in the first days after surgery. The same HA will be promptly diluted after exposure to a balanced salt solution or to the restored aqueous humor in the following days; this explains the success achieved with a new tamponade of the hole and an additional fluid–gas exchange in the first few days after the failed procedure. Further investigations on the behavior of the HA in vitro are needed; in the meantime, however, any maneuver facilitating the pooling of HA in front of the hole should be avoided. 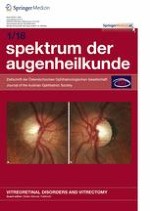