Barrett’s esophagus (BE) results from gastroesophageal reflux disease (GERD) and harbors an increased cancer risk. Via low (LGD) and high grade dysplasia (HGD) BE may progress towards cancer (0.5 %–0.75 % annual risk). Radiofrequency ablation (RFA) represents a novel endoscopic method for durable elimination of BE. RFA is effective for cancer prevention persons with HGD. Remains to be questioned the value of RFA in those with LGD.

Critical analysis of the paper by Phoa K et al., published in the recent issue of JAMA. The randomized clinical study compared the effect of surveillance vs. RFA in persons with BE and LGD.

After 3 years, RFA was superior vs. surveillance as it significantly inhibited progression to cancer and/or high grade dysplasia (1.5 % vs. 26.5 %). The number necessary to treat to prevent cancer/HGD and cancer was 4.0 and 13.6, respectively.

RFA is superior to surveillance to prevent the progression of BE with LGD to HGD/cancer and cancer. Thus RFA should be recommended as the treatment of choice for the management of BE with LGD in those fit for the endoscopic procedure. Future studies will have to elicit the impact of orchestrated therapy of dysplastic BE including anti reflux surgery. Finally the value of RFA for cancer development in those with non-dysplastic BE should be addressed. 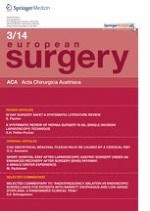 Short hospital stays after laparoscopic gastric surgery under an Enhanced Recovery After Surgery (ERAS) pathway: experience at a single center

The lemon taste of limos

Can obstetrical brachial plexus palsy be caused by a cervical rib?