The objective of this study was to analyze the percentage as well as clinical and laboratory characteristics of Lyme neuroborreliosis (LNB) in patients admitted with peripheral facial palsy. Additionally, we looked for diagnostic criteria to distinguish Bell’s palsy from facial palsy due to LNB.

Data collection was done retrospectively from 2007 until 2012. We identified 278 consecutive patients, who were admitted to the department of Neurology due to peripheral facial palsy. Patients were routinely investigated for LNB including clinical neurological examination and cerebral spinal fluid (CSF) analysis. Demographic and clinical data were analyzed according to a standardized protocol.

According to the results of our study, we recommend CSF testing in any case for patients with facial palsy in an endemic area from June to October especially if additional radicular symptoms are present. To establish recommendations for a diagnostic workup in patients with facial palsy in areas endemic for Borrelia, the seasonal clustering of LNB as well as specific clinical features should also be confirmed in a future prospective trial. 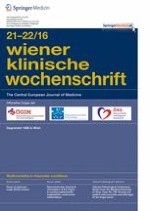 The evaluation in terms of sarcopenia of patients with fibromyalgia syndrome