The majority of therapeutic decision-making takes place between therapists and elderly people. The present study sought to determine the individual preferences of elderly people in the therapist–patient interaction. From October 2010 to January 2011, data from elderly students (n = 297, mean age  > 60) were collected at three different university sites in Germany (Halle-Wittenberg, Cologne and Munich). The study used a structured questionnaire. Younger students (n = 182, mean age = 20.5) at the University of Halle-Wittenberg were questioned as well, in order to show age-specific differences. None of the participants was hospitalised. At the University of Munich, elderly students (n = 42) were given interaction-skill training for patients prior to taking part in the study. The effect of the intervention was measured in the study. Elderly participants and especially those with higher morbidity and a poorer state of information about their state of health refused to get involved in the process of medical decision-making. A group of elderly participants who received special interaction-skill training for patients afterwards preferred an equal therapist–patient relationship as well as shared decision-making. Younger participants favored an informative–participative interaction. The guidelines of therapeutic decision-making that are applied in practise do not always meet the individual needs of the elderly. Interaction-skill training for patients has great potential to both: encourage patients to get involved in the process of medical decision-making and to assume more autonomy. Hence, the aim should be to compound autonomy-empowerment and interaction-skill training for elderly people. 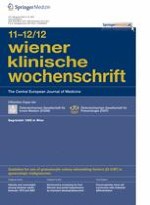 Acute injuries and overuse syndromes in sport climbing and bouldering in Austria: a descriptive epidemiological study