A decade ago women with ST-elevation myocardial infarction (STEMI) were significantly older than men, with more comorbidities, less likely treated by primary percutaneous coronary intervention (PPCI) and their prognosis was worse. The progress in treatment led to increased survival after STEMI. Our aim was to evaluate the possible current differences between the genders in treatments, mortality and the changes in women over time in STEMI population.

We retrospectively evaluated 307 STEMI patients (224 men, 83 women), admitted between October 1, 2011 and December 31, 2012 and a historic group of 523 STEMI patients from 2008 to 2009 (361 men, 162 women). Reperfusion strategy was PPCI, combined with aspirin and clopidogrel or prasugrel or ticagrelor and a heparin with glycoprotein receptor IIb/IIIa antagonist or bivalirudin. Between the genders and in women over time we compared clinical data, the use and time to PPCI, in-hospital complications, 30-day and 6-month mortality.

Women still account for 1/4 of STEMI population, but the gap between the genders in presentation, treatments and outcome in STEMI population is decreasing.
Anzeige
Vorheriger Artikel Clinical and laboratory characteristics of viral lower respiratory tract infections in preschool children
Nächster Artikel Partial skull base tumour resection in combination with radiosurgery: an escape procedure or a reasonable solution of treatment? 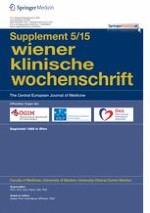 Influence of cataract surgery on macular thickness: a 6-month follow-up