All adult patients diagnosed with colorectal cancer in our institution from January to March 2013 were included in this prospective, observational study. During the same period, a control group with normal colonoscopic findings were included. After inclusion into the study, blood samples were collected from all participants. Serums obtained from the samples were stored at − 20 °C. Galectin-3 levels in blood samples were measured with an in vitro cantitative enzyme-linked immunosorbent assay (ELISA). 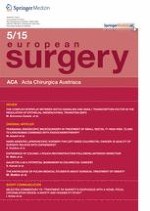