The nine Austrian regions differ according to demographic parameter, health status, and health care structure. It was the aim of this study to analyse whether there are also differences in access points towards the level of ambulatory care.

There were significant differences in patients with direct utilisation of specialists without having consulted a general practitioner (GP) in the same period in the Austrian regions, with highest proportions for women in Vorarlberg (20.3 %) and men in Vienna (21.5 %) and lowest in Burgenland (7.0 and 6.6 %, respectively). The specialist/GP ratio correlated significantly with the direct specialist utilisation (Spearman correlation coefficient: 0.717).

There are spatial differences in the health care utilisation within the Austrian regions, which partly can be explained by the disposal of health care structure. These findings are of special importance according to the ongoing debate concerning the topic strengthening the primary health care sector in Austria. 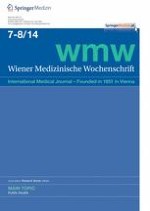 Preventive medicine: self-assessment of knowledge, skills and attitudes of medical students at the Medical University of Vienna

Health care utilisation in subjects with osteoarthritis, chronic back pain and osteoporosis aged 65 years and more: mediating effects of limitations in activities of daily living, pain intensity and mental diseases

Public health in Austria: a snapshot