The aim of this study was to assess CD45-positive platelets (CD45+ platelets) involvement in restenosis development after drug-eluting stent (DES) implantation in patients with stable coronary artery disease (CAD).

The study comprised 126 male and female patients with stable angina pectoris, who underwent elective coronary stenting with DES and follow-up angiography within 6–12 months. The patients were assigned to the group with restenosis (n = 53) or group without restenosis (n = 73) according to the follow-up angiograms. In both groups we compared the level in blood of CD45+ platelets, the clinical, laboratory and angiographic variables, which may affect the development of restenosis. We have also constructed a logit regression model for prognosis of restenosis occurrence after DES implantation.

The blood count of CD45+ platelets was higher in patients with restenosis than in patients without: 0.82 % (0.58; 1.12) vs. 0.34 % (0.20; 0.68), p < 0.001, data are expressed as median (lower quartile; upper quartile). By binary comparisons of more than 35 different clinical, laboratory and angiographic variables we identified 8 significant risk factors for the development of stent restenosis after DES. In order to define the risk of the development of restenosis, we have built a logit regression model. The resulting logit regression equation included the level of CD45+ platelets, the neutrophil to lymphocyte ratio (NLR), small diameter arteries stenting and the number of simultaneously implanted stents in one patient. Receiver operating characteristic (ROC) curve analysis has demonstrated the high prognostic value of the resulting logit regression equation with an area under the curve (AUC) of 0.91 % (p < 0.001).

The acquired data indicate the presence of a close relationship between circulating CD45+ platelets and restenosis development after DES implantation in patients with stable CAD. 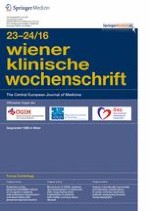 Orosomucoid is an independent predictor of prognosis in chronic heart failure