Antiangiogenic compounds were the first active targeted agents implemented in the treatment of ovarian cancer. Bevacizumab and tyrosine kinase inhibitors such as pazopanib, nintedanib and cediranib target the VEGF pathway, while trebananib was developed as an inhibitor of the angiopoietin pathway. All these compounds have been extensively evaluated and, in this review, we provide a structured overview of the randomized trials that have been performed in both primary and relapsed ovarian cancer. From this data, it is evident that antiangiogenic therapy has its place in ovarian cancer. If not during first-line treatment, then at least at some point for the treatment of relapsed disease. In addition, we address and summarize the trials designed to address the remaining issues related to treatment duration, continuation beyond progression and optimal combination. The future clinical development of angiogenesis inhibitors in ovarian cancer indeed looks at combinations with poly (ADP-ribose) polymerase (PARP) inhibitors, immune checkpoint inhibitors and vascular disrupting agents. Finally, an overview is given of the retrospective translational studies that were performed on the samples of the two pivotal first-line trials GOG(Gynecologic Oncology Group)-218 and ICON(International Collaborative Ovarian Neoplasm study)7, with initial evidence for the predictive value of the BRCA status, some molecular subtypes and histological assessment of microvessel density. If confirmed, these biomarkers could further improve the implementation of antiangiogenic therapy in ovarian cancer.
Anzeige
Vorheriger Artikel Anti-angiogenic therapies in brain metastases
Nächster Artikel My burning issues in the neoadjuvant treatment for breast cancer 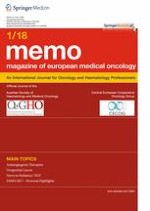 My burning issues in the neoadjuvant treatment for breast cancer