The present study is an attempt to compare the effects of letrozole therapy plus monitored exercise and letrozole therapy alone on pregnancy outcomes in infertile patients with polycystic ovary syndrome (PCOS).

Despite the well-proven benefits of exercise for the general population and the fact that it is recommended as a basis for PCOS management, few completely controlled studies have evaluated the impact of exercise on PCOS. The present study results revealed that regular exercise combined with letrozole therapy would lead to better pregnancy outcomes in women with PCOS compared to letrozole alone.
Anzeige
Vorheriger Artikel Neuroendokrine Regulation des menschlichen Energiestoffwechsels 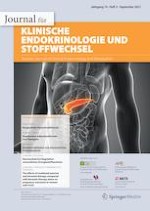