» Jetzt Zugang zum Volltext erhalten
Wichtige Hinweise
The supplement is dedicated to Jubilee World congress of International College of Surgeons 2015.
The publishing was sponsored by the Ministry of Health of the Czech Republic.

The analysis was performed retrospectively on 1350 patients referred for sentinel lymph node biopsy (SLNB) during the 5-year period 2010–2014.

Metastatic involvement of SN was found in 286 patients (21 %). A subgroup of 274 (96 %) patients, of whom 90 (33 %) had NSN involvement, underwent axillary lymph node dissection (ALND). A prediction model was developed using the significant predictors detected by the univariate analysis.

The most important predictive factors of NSN involvement were the ratio of positive-to-removed SN, size of metastases and a tumour lympho-vascular invasion (LVI). The model may serve to optimize treatment strategies for patients presenting more of the identified risk factors for NSN involvement. 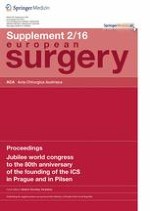 Surgical treatment of the progressive endoleak type II after EVAR

The importance of protective ileostomy during rectal resection