This review gives a historical overview about the development of today’s understanding of benign thyroid diseases and the possibilities of their treatment.
Little was known about the thyroid gland until the nineteenth century: the state of knowledge was (1) that something in food, especially in seaweed, avoided the development of goiters, (2) that goiters seemed to have something to do with cretinism, and (3) that the thyroid gland is an organ consisting of two lobes connected by an isthmus.
Shortly after the detection of iodine in 1811, its impact on its ability to avoid the development and the growing of goiters has been realized.
The existence of iodine within the thyroid and in human plasma was detected approximately a decade later. The clinical picture of hyperthyroidism including endocrine orbitopathy was described in detail in the middle of the nineteenth century, the etiology of the disease remaining, however, unclear until a century later.
In early nineteenth century, surgical goiter exstirpation was the only available form of treatment. Vienna and Berne were the centers leading worldwide in their expertise. Subcutaneous injections of sheep thyroid extracts were developed for treatment of postoperative hypothyroidism as well as congenital myxedema. Another approach suggested by Swiss surgeons was thyroid transplantation. Radioiodine therapy of hyperthyroidism was introduced in the middle of the twentieth century.
Thyrostatic drugs are available since about the same time.
The different forms of thyroiditis were described at the turn of the twentieth century. The etiology of chronic autoimmune thyroiditis was, however, clarified only some 50 years later independently by two groups of scientists, one in London, UK, and the other in Buffalo, USA.
Thyroxine was isolated from bovine thyroid extracts in the beginning of the twentieth century. Its synthesis and correct chemical structure were described some 10 years later. The existence of 3,5,3’-triiodothyronine (T3), the biologically most active thyroid hormone, was detected in the 1950s of the past century by a group in Paris and another in London.
The extrathyroidal conversion of thyroxine to T3, as the main source of circulating T3, was suggested shortly thereafter and substantiated in 1970.
Finally, the development of the radioimmunoassay method for determination of hormone serum concentrations in 1959 enabled today’s exact laboratory diagnosis of thyroid diseases. 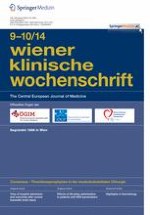 Erratum to: Epidemiology of traumatic brain injury in Austria

Early atherosclerosis in HIV-infected patients below the age of 55 years: Slovenian national study