Parasitic helminths and helminthoses do not only occur in the tropics and subtropics but are also prevalent in Austria and other Central European countries. Their prevalence is, however, more or less rather low. In total, we know more than 20 helminth species, which are diagnosed regularly in Austria; some of them occur in Austria autochthonously, some others are acquired abroad and are transferred as souvenirs to Central Europe. The spectrum of helminths described in this overview comprises species of the trematodes (flukes), cestodes (tapeworms), and nematodes (roundworms).
The topic “Helminths and helminthoses in Central Europe” is divided into three parts: The first part comprises a short introduction into the field of medical helminthology and is primarily dedicated to the description of trematodes and trematode-caused diseases. 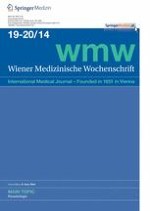 Erratum to: Benign chondroid syringoma (mixed tumor of skin) on the flank with satellites: case report and literature review