Facial nerve palsy secondary to Epstein–Barr virus infection of the middle ear in pediatric population may be more common than we think | springermedizin.at Skip to main content
TOOLBAR 1 2 3 4
SUCHE MENÜ 1 2 3 4

Facial nerve palsy is a rare complication of acute otitis media (AOM). The general understanding is that this complication has a bacterial cause although bacteria can be isolated from the middle ear only in approximately two-thirds of cases of AOM. Detection of viral agents from specimens obtained during myringotomy in patients with AOM suggests a possible role of viruses in the etiology of this disease.

We studied 5 otherwise healthy 17- to 27-month-old children who were referred to the Department of Otorhinolaryngology and Cervicofacial Surgery from December 2012 to January 2016 because of AOM and ipsilateral facial nerve palsy. In all cases, serological tests were indicative of a primary Epstein–Barr virus (EBV) infection and no other causative pathogens were identified during hospitalization. In one patient, the technique of in situ hybridization (ISH) detected EBV-specific ribonucleic acid (RNA) sequences within tissue sections obtained during mastoidectomy. 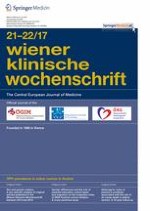 Gender differences and the role of parental education, school types and migration on the body mass index of 2930 Austrian school children