At all ages between 11 and 16 years the BMI of students attending VSS was significantly higher than that of students attending AHS (mean +0.87kg/m2). The AHS students were on average taller (mean +0.93cm; p<0.001), without statistically significant age-specific differences. The taller height contributed to lower BMI by approximately 25%. Short stature, overweight and obesity were 2.3-fold, 1.8-fold and 2.5-fold, respectively more frequent in VSS than in AHS students. The BMI was higher in students in Vienna than in communities with >100,000 (p<0.001) and 20,000-100,000 (p=0.045) but similar to communities with <20,000 inhabitants.

These findings suggest that differences in BMI and height between students reflect early SES-based grouping into school types according to the academic level of the schools they attend. 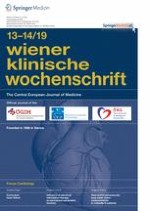