Myiasis is an infestation of neglected open wounds by fly larvae. Global warming, related climate changes, and increased traveling in tropical countries may contribute to the worldwide diffusion of new fly species. Common risk factors for myiasis are advanced age, poor hygiene, malnourishment, social isolation, diabetes, cancer, and peripheral artery disease. The aim of this study was to review the characteristics of cases of myiasis reported in Europe.

A narrative review of cutaneous myiasis was performed using PubMed, EMBASE, Web of Science database, and the search terms “human,” “myiasis,” “cutaneous myiasis,” “maggot,” “Europe,” “wound,” with the combination of “AND” and “OR.” In addition, hospital charts were reviewed to add personal experience to the literature review.

Overall, 52 articles, both single case reports and case series reporting cutaneous myiasis, were found in the medical literature of the past two decades. A total of 64 patients living in Europe were identified, of whom 36% had wound myiasis. In addition to the literature review, we report the case of a male patient who presented with myiasis within a deep scalp ulcer occurring after radiotherapy for basal cell carcinoma.

Myasis is rare and possibly under-reported in Europe. The epidemiology of this infestation may be changing in the future due to climate variability, a rise in travel to tropical areas, and the migration of fly species.
Hinweise

Climate change is widely regarded as one of greatest challenges facing ecological systems and biosecurity in the coming century. The planet is warming from the north to the south pole, and the global average temperature has increased by approximately 1 °C over the past century. Climate changes have led some animal species including mosquitos, ticks, and flies to thrive and, as a consequence, to spread diseases such as malaria and Zika virus infection. Contrary to other insect species, flies are predicted to increase in this warming scenario (Warming Climate Implies More Flies—and Disease, Feb. 20, 2019, www.​scientificameric​an.​com).
Anzeige
Myasis (from the Greek, myia, meaning fly), first described by Hope in 1840, refers to a condition where fly larvae (maggots) infest the skin of a living human or vertebrate animals, feeding on dead or living tissues [1]. Myiasis shows seasonal variations, and the prevalence of this infestation is related to the latitude and the life cycle of the fly species. According to the relationship between the host and parasite, there are three forms of myiasis: obligate (tropical in origin), facultative [2], and accidental [3]. The last two, although rare, can be found worldwide. Climate change and the migration of fly species due to increased travel to tropical areas may increase the incidence of this infestation in Western countries. Cutaneous myiasis is the most frequently encountered clinical form. Risk factors predisposing to this condition are open wounds, advanced age, poor hygiene, low socioeconomic conditions, psychiatric illness, alcoholism, metabolic disorders, vascular disease, cancer, and physical handicaps [4‐7].

We performed a search for articles reporting on cutaneous myiasis in adult patients, acquired in Western Europe or acquired overseas but diagnosed in Western Europe over the past two decades. A literature review was performed to identify all published articles on cutaneous myiasis in PubMed, EMBASE, and Web of Science database, using the keywords “human,” “myiasis,” “cutaneous myiasis,” “Europe,” “Western Europe,” “wound,” with “AND” and “OR.” We also consulted the hospital electronic database to find the records of patients admitted to the emergency room for cutaneous parasitic infestations. Demographic and clinical patient data were extracted from the hospital charts. Written informed consent was obtained from patients.

Our literature search yielded 1920 articles published between 2000 and 2020. Reports describing patients observed in countries other than Western Europe (Turkey, India, Pakistan, Malaysia, United States, Canada, Brazil, China, etc.) were excluded. A total of 52 papers were selected including 64 patients reported in Europe. The main patient characteristics are presented in Table 1 [8‐60]. Myiasis was mainly described as furuncular (64%) or associated with a wound (36%). Reports comprised single case reports and case series including up to seven patients. The median age was 47 years (range 21–101), and 39 (61%) patients were males; in more than 50% of patients, myiasis was acquired in a tropical country but diagnosed in Western/Southern Europe, mostly Italy and Spain. The principal anatomical site was the head and neck region (38%), followed by lower limbs and trunk. Diabetes mellitus and head and neck tumors were the most common comorbidities. The main fly species involved where Dermatobia spp., Cordylobia spp., and Lucilia spp.
Table 1
Cutaneous myiasis: summary of case reports in Western Europe (2000–2020)

A 91-year-old man presented to the emergency department complaining of moderate bleeding from a skin lesion in the frontotemporal area. His medical history was notable for diabetes mellitus and invasive basal cell carcinoma treated first with surgery and then with radiotherapy (20 Gy) due to local recurrence. Physical examination revealed a deep, ulcerated lesion, 4 × 5 cm in size, with numerous maggots inside. Mechanical removal of all larvae, intensive irrigation with saline solution, and wound debridement were performed. Laboratory findings were normal. A computed tomography scan showed full-thickness bony destruction and no meningeal lesions (Fig. 1). After multidisciplinary team discussion (surgeon, neurologist, radiologist), only frequent dressing changes and antibiotic therapy were recommended. One week later, the patient was doing well with no evidence of maggots and no signs of wound infection or neurologic involvement.
×
Anzeige

This review shows that wound myiasis is rarely reported and possibly underestimated in Western Europe, confirming that epidemiological data on human myiasis are scant [7]. In our case, myiasis complicated the clinical course of an elderly patient with recurrent basalioma of the scalp after failed surgical excision and radiotherapy. Half of the patients in our review had a history of recent travel, the majority from Central–South America. Compared with the United States [61], reports of autochthonous cases of myiasis in Western Europe appear less common. In the future, climate change and possible migration of new fly species from tropical and subtropical countries could increase the incidence of this condition and modify the epidemiologic characteristics of human myiasis in Europe. In view of this changing scenario, larval identification by an entomologist and registration of all observed cases should be pursued [7]. Well-known risk factors predisposing to myiasis are open wounds, frailty syndrome, poor hygiene, low socioeconomic conditions, psychiatric illness, alcoholism, diabetes, vascular disease, and cancer. Complex wounds are frequently seen in nosocomial, hospice, and palliative medicine settings, and wound myiasis may worsen the symptom burden and may cause distress both to patients and caregivers [62]. Health education and prevention of conditions that favor myiasis infestation represent the most effective intervention. For individuals traveling to rural endemic areas, covering the body with long-sleeve shirts, pants, and hats, use of insect repellents, and sleeping on raised beds, in screened rooms, or under a net are recommended. Clothes should be hot-ironed and dried to remove residual eggs. Simple antisepsis and dressing are adequate to prevent wound myiasis [7].
In general, myiasis is a self-limited infestation and carries minimal morbidity. Treatment of cutaneous-wound myiasis consists of application of toxic agents to kill the larvae or perilesional infiltration of local anesthetics to force the emergence of the larvae. Pharmacological treatment with ivermectin or tiabendazole has been proposed on the basis of anecdotal reports, mainly from veterinary medicine, but no controlled studies are available [7]. Mechanical debridement and frequent renewal of wound dressing are curative in the majority of cases [62, 63].
Interestingly, therapeutic myiasis involving sterile harvesting of facultative fly larvae applied on chronic wounds is a well-known option for necrosis debridement, disinfection, and enhanced healing [64‐66]. Lucilia sericata is considered the most suitable species for therapeutic application [7].

E. Andreatta and L. Bonavina declare that they have no competing interests.

All procedures performed in studies involving human participants or on human tissue were in accordance with the ethical standards of the institutional and/or national research committee and with the 1975 Helsinki declaration and its later amendments or comparable ethical standards. Informed consent was obtained from the patient included in the study. Internal review board approval HSD 2020-077.
Open Access This article is licensed under a Creative Commons Attribution 4.0 International License, which permits use, sharing, adaptation, distribution and reproduction in any medium or format, as long as you give appropriate credit to the original author(s) and the source, provide a link to the Creative Commons licence, and indicate if changes were made. The images or other third party material in this article are included in the article’s Creative Commons licence, unless indicated otherwise in a credit line to the material. If material is not included in the article’s Creative Commons licence and your intended use is not permitted by statutory regulation or exceeds the permitted use, you will need to obtain permission directly from the copyright holder. To view a copy of this licence, visit http://​creativecommons.​org/​licenses/​by/​4.​0/​. 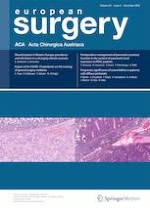 Prognostic significance of comorbidities in patients with diffuse peritonitis

Repeated hepatic resection for colorectal liver metastases: is this concept safe and feasible?