With an estimated global prevalence rate of 1405 per 100,000 individuals, alcohol use disorder (AUD) represents the most common substance use disorder and places a significant burden on health care worldwide. Globally, harmful alcohol consumption and its associated comorbidities account for more than 3 million deaths (5.3% of all deaths) per year [ 1] and over 5% of all disability-adjusted life years (DALYs) [ 2]. Analyzing the current situation in Austria, data show that with an estimated prevalence of 1795 per 100,000 population, the burden of this disease exceeds the global average (1405 per 100,000) [ 1, 2]. The World Health Organization (WHO) reported 48% of all alcohol-related deaths to be attributable to liver cirrhosis in 2016, making it the most common cause of death among more than 200 known diseases associated with alcohol consumption. Besides its frequency within the population of patients suffering from AUD, liver cirrhosis as the final stage of alcohol-related liver disease (ARLD) is also of particular importance [ 3‐ 5] as the already high frequency of ARLD among all liver diseases has been reported to be increasing for Europe and Central Asia [ 3]. Currently, the only curative treatment option available for decompensated liver cirrhosis is liver transplant (LTX) [ 3‐ 5]. In Europe, about 7300 LTX were performed in 2017, 50% of which were necessitated due to cases of decompensated liver cirrhosis—up to 19% ( n = 693) of those 50% attributable to AUD [ 6].
However, the actual determination of key epidemiologic figures, such as prevalence and mortality, is limited by several challenges: AUD is still associated with a high level of stigma within many societies [ 7‐ 10]. This uncertainty not only impedes the evaluation in prevalence studies but also in clinical screening situations. Since, in contrast to diseases with distinct and objectively observable symptoms, the diagnostic criteria for AUD are almost exclusively based on self-disclosed information on behavior [ 11] and stigma-associated denial or understatement of drinking behavior is likely to occur. Furthermore, stigma associated with AUD may also reduce individuals’ willingness to seek treatment or medical advice. These factors are likely to cause an underestimation of the prevalence when health care data are used to determine the prevalence of AUD [ 12] and thus confound not only epidemiologic data of AUD itself but also those of secondary and associated diseases of harmful alcohol use, such as alcohol-related liver diseases (ARLD). Therefore, available epidemiologic data regarding AUD need to be interpreted with caution.
Anzeige
This paper aims to discuss different epidemiologic models estimating the prevalence of AUD and ARLD for a specific country or region, using Austria as an example, to further increase our understanding of epidemiologic data and to fully understand the scope of this disorder as well as associated secondary diseases. In addition, strengths and limitations of each model will be considered, and calculated numbers will be compared to national liver transplantation (LTX) data, with the latter being the sole relevant treatment option in patients suffering from ALRD.

A literature search for epidemiological models estimating the prevalence of AUD and associated secondary diseases was conducted in Embase, Scopus and MEDLINE. Identified approaches were first evaluated for their strengths and weaknesses, and their results recalculated applying the newest available data. Anonymized data regarding all LTXs within Austria were extracted from the “Transplant Jahresbericht 2018” [ 13]—including the number of conducted LTXs, waiting list metrics and the number of donated organs. In a further step, these metrics were set in relation to the need for LTXs due to alcohol-related liver cirrhosis.

Besides health survey-based estimations and models based on economic data, the Jellinek formula, an estimation based on the mortality of ARLD, is an approach to determine the prevalence of AUD in specific populations. The yielded results for Austria suggest that AUD may still be an underestimated problem. Furthermore, the considerable gap between deaths due to ARLD and the number of conducted LTXs due to ARLD is alarming, as well as the distinct regional differences in the supply of LTXs in between Austrian states. The shortage of donor organs highlights the importance of early detection and intervention in AUD prior to the emergence of ARLD.

This research did not receive any specific grant from funding agencies in the public, commercial, or not-for-profit sectors.

Stephan Listabarth, Andrea Gmeiner, Nathalie Pruckner, Sandra Vyssoki, Andreas Wippel and Daniel König wrote the first and the final draft of the manuscript. All authors contributed to and have approved the final article.
Anzeige

S. Listabarth, A. Gmeiner, N. Pruckner, S. Vyssoki, A. Wippel, and D. König declare that they have no competing interests.
Open Access This article is licensed under a Creative Commons Attribution 4.0 International License, which permits use, sharing, adaptation, distribution and reproduction in any medium or format, as long as you give appropriate credit to the original author(s) and the source, provide a link to the Creative Commons licence, and indicate if changes were made. The images or other third party material in this article are included in the article’s Creative Commons licence, unless indicated otherwise in a credit line to the material. If material is not included in the article’s Creative Commons licence and your intended use is not permitted by statutory regulation or exceeds the permitted use, you will need to obtain permission directly from the copyright holder. To view a copy of this licence, visit http://​creativecommons.​org/​licenses/​by/​4.​0/​. 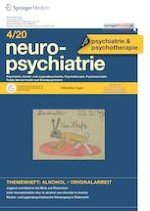