The study included 76 healthy controls and 103 patients who were referred to the Department of Neurology, Medical University of Vienna for neurocognitive assessment. An administering and scoring system for the VVT was developed.

Internal consistency (Cronbach’s alpha) was found to range from 0.82 for the healthy control group to 0.93 for the total patient group. There was no sex effect, but age had a negative effect on VVT performance. The VVT successfully differentiated healthy controls from MCI patients, AD patients, and PD patients, respectively.

The VVT shows satisfactory validity and reliability and can be administered easily in clinical practice. It constitutes a new measure that can successfully be used to identify visuo-constructional problems in patients with cognitive dysfunction. 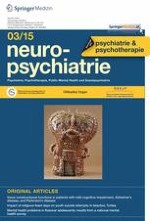