To report the result of primary vesicovaginal fistula (VVF) repair using the transabdominal approach with omental or peritoneal flap interposition.

The study evaluated 38 patients who were treated with transabdominal approach with omental or peritoneal flap. The omental flap was used as the first choice if it was of sufficient length; otherwise, a peritoneal flap was created. Patients were followed postoperatively for 1 year and by telephone survey thereafter.

The age of patients ranged from 29 to 68 years, with a median of 52 years. The main causes of VVF in this study cohort were hysterectomy for benign conditions (60.5 %), hysterectomy for malignant conditions (34.2 %), and radiation therapy (5.3 %). Peritoneal flap interposition was used in 6 patients and omental flap was used in 32 patients. All patients were continent following catheter removal. Overall, 89.5 % (34 out of 38) of fistulae were successfully repaired at first attempt. The success with omental flap interposition was 100 %. Recurrence of the fistula was reported in four patients (all with primary peritoneal flap interposition). Two of them were successfully cured by peritoneal flap re-interposition. While in two patients, with a history of radiation therapy, sigma rectum pouch was performed.

Transperitoneal surgical repair using omentum or peritoneal tissue interposition should be considered in the first attempt of repair of supratrigonal VVFs. However, successful repair depends on the experience of the surgeon. 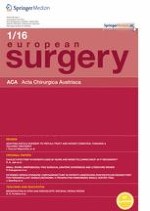 Cholecystectomy in patients aged 80 years and more following ERCP: is it necessary?